Just a few months ago when first quad core powered device wrapped off in the gadgets arena worldwide with hefty price tag but now it seems that a new trend has been started by all the manufacturers around the globe in which they are aiming compete with each other by incorporating high specifications and features in their devices at the most possible low price tag. And to continue this legacy another company serving in electronic industry has officially announced to introduce it’s new element in the tablet segment named, “Ramos X10” Quad Core powered device in the Indian market. 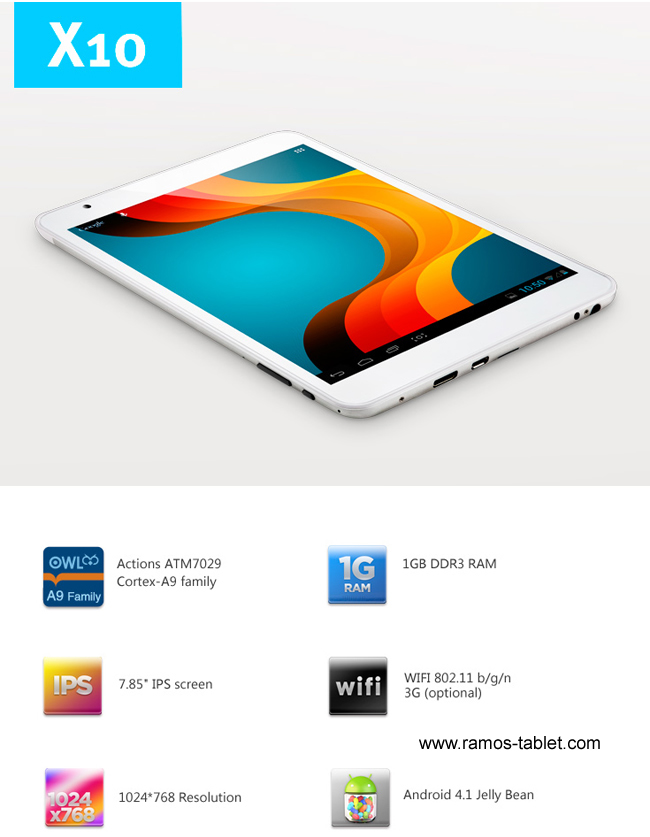 Seeing current market trend in launches of more powerful devices one after another, already tech geeks have started predicting the future of this most bulkiest industry with thousands of new gadgets dipping in across the globe that there will be a time when Oct Core and Hexa Core (speculated) powered device will soon be launched in the market at an affordable price tag.

The Ramos is another multicore device, now eying towards the specifications of this element in terms of frame up, Ramos X10 sports 7.85 inch of IPS LCD Capacitive Touch screen display with 1024*768 pixels resolution, 5 point multi-touch. Dealing with it’s platform dependency, this device sails on Android 4.1.1 Jelly Bean Operating System powered with a Quad Core ATM7029 ARM A9 processor clocked at 1.5 GHz coupled with Vivante GC1000 GPU chip. In terms of Storage Specifications, Ramos X10 tablet is equipped with 1GB DDR3 RAM, 16GB of Internal memory which can be easily expanded up to 32 GB via micro SD card slot.

Specifying it’s weighs and overall dimensions, it weighs nearly 362 gms and measures 200 x 138 x 8.9mm in overall dimensions. Enumerating it’s Image Optics, this device is offered with Dual Camera, a primary camera on the back rated at 5 MEGAPIXEL and a secondary camera rated at 2 MEGAPIXEL for video calling. Briefing it’s Connectivity support, it does not support Bluetooth, GPS, inbuild 3G which can be the biggest drawback of this device though it support Wifi 802.11 b/g/n, google play, Pre-installed browser, OTG, and support 3G via external dongle support. However, this device supports 3G externally with E1916, ZTE AC2736, HUAWEI E1750, HUAWEI EC122, HUAWEI EM770W dongles.

On the dimensions and design front , it’s somehow packed up with the same visual examination as of Apple iPad mini but comparing it with Apple iPad mini, in terms hardware, X10 is way ahead as it supports 1.5Ghz quad-core CPU and 1GB RAM where as the iPad mini only has a 1ghz dual-core processor and 512mb RAM. 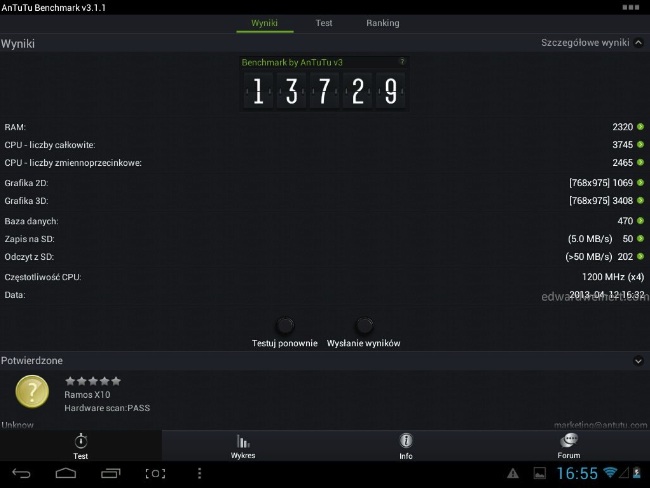 To make the life going on for this device, Ramos X10 is equipped with 4000 mAh of battery with 4-5 hours of worktime. Some of the pre-installed applications include ES File Explorer , Google Search, Google Maps, Browser, Gallery, Clock, Market, Calculator, Calendar, Video, Email, Gmail and many more.

Inside the packet, it include a charger, USB cable, User Manual( English, Russian, German, Spanish), a tablet. The Price of Ramos X10 Quad Core tablet is Rs 9,999 + taxes.