Acer Incorporation, one of the biggest multi-tech corporations serving in electronics industry worldwide has announced it’s third smartphone since the beginning of this year under it’s prodigious “Liquid series” named as, “Acer Liquid E2” in the Indian market. 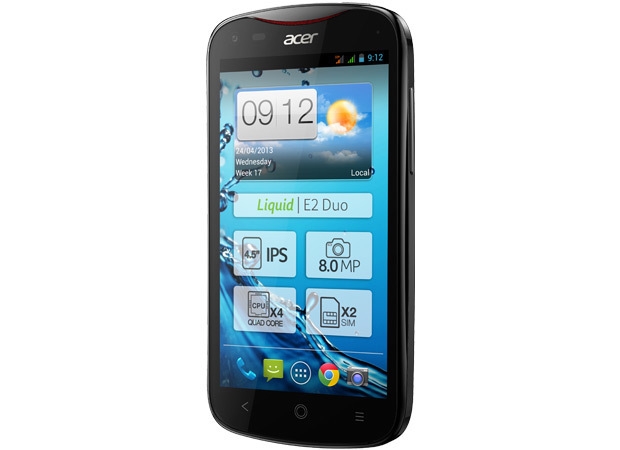 Just a couple of months ago, Acer introduce this series in the gadgets industry and within a quick span of time it has became a quite successful series launched by the company. Earlier, Acer started this series by dipping it’s first entrant named Acer Liquid and just after a few weeks another element introduced as Acer Liquid E1, slightly upgraded in terms of Specifications. Now, rotating the shaft towards the third element in the same series and specifying it’s features, Acer Liquid E2 flaunts 4.5 inch IPS LCD Capacitive TouchScreen display with 540 x 960 of pixels resolution, 16M colors and 5 point multitouch screen. Acer Liquid E2 will be company’s first Smartphone listed in the whole line up. Dealing with it’s Platform dependency, Acer Liquid E2 sails on Android v4.2.1 Jelly Bean Operating System powered with a Quad Core Cortex-A7 processor clocked at 1.2 GHz, MTK 6589 chipset. To make the graphics of this device more glittered this device is equipped with PowerVR SGX 544MP GPU chip. It also support Dual Sim with Dual Standby technology.

In terms of Storage specifications, Acer Liquid E2 is equipped with 1GB of RAM, 4 GB of Internal memory which can be easily expandable up to 32 GB via micro SD card slot. Enumerating the device Photography Specifications, Acer Liquid E2 offered with both the cameras, a primary camera at the back rated at 8 MEGAPIXEL, 3264 x 2448 pixels resolutions, it also support autofocus and LED flash technology, apart from the primary camera it also houses a secondary camera at the front rated at 2 MEGAPIXEL for video calling.

To make the life going on for this handset this device is powered up with 2000mAh of Li-on Battery which will deliver 9 hours of talktime and 450 hrs of Standby time.

Since Acer has also joined bandwagon of quad-core processor, it will be quite interesting to see how they fare in the now over cluttered smartphone market. For more updates and news, stay tuned with, you may subscribe to our feed, facebook page or follow us on twitter.