If from last 2 or 3 days you are trying to find way to get 20GB 3G data on BSNL for Rs. 50 and failing in it then its not your fault. Its actually fault of some so called famous news website who fueled this hoax. Yes, you read it right, 20GB 3G data for Rs. 50 from BSNL was a hoax and social media as well some news websites resulted in spreading it further. 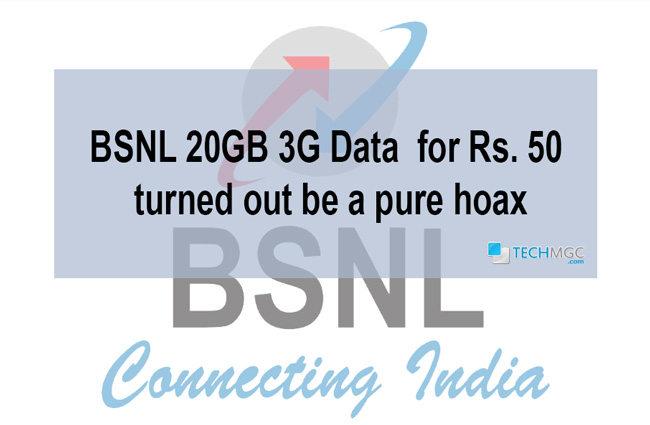 We had information about this offer but on our primary investigation, there was no proper proof for this it’s authenticity. Even if BSNL is trying to be competitive , they will not go for such stint. This news was further fueled by Social Media where people blindly shared it. Ofcourse its lucrative but it was too good to be true.

As per report published in TOI, while BSNL is yet to release an official statement, sources confirmed that there is no such offer for consumers. BSNL has not officially declared any offer like 20GB 3G data for Rs 50 and neither does the company intends to do so.

So, how this rumour started at first place ?

Recently BSNL did launch some data sharing plans, special tariff vouchers (STVs), which allow sharing of data among a group of pre-paid subscribers, in South zone. “A pre-paid BSNL customer can subscribe to this data pack and share it with four other pre-paid subscribers,” the company said. The company said 11 data-sharing packages are available under this scheme, starting from ₹173 for 1.2 GB (18 days) to ₹2,013 for 21 GB (90 days) (exclusive of service tax). The scheme will soon be expanded pan-India for pre-paid mobile subscribers.

On the other hand, Reliance Jio is about to commence there commercial services and they are expected to come up with some aggressive data plans. Hence some notorious elements, probably on social media announced that Government of India has subsidized BSNL’s new 20GB plan for Rs. 50 to make Internet affordable and can be shared among various users. This was picked up by some well known non-press websites as BSNL’s attempt to woo more customer and counter upcoming data tariff war. Later some famous news media houses also took it published without verifying its authenticity. Further, social media left no stone unturned to spread it to masses.

We at TechMGC, also tried to verify it and since were skeptical about its authenticity after internal investigation, we dropped it.

Interesting note is that this is a classic example how one can exploit social media to spread rumours, time to time we see people / anti-society material using for their benefits and making fool of general public. I think its high time that we should stop blindly believing social media, stop spreading false information. Ofcourse, not every thing on social media is false but use of general conscience is advised.