One of the leading marathoner in the race of fastest growing company in mobile segment, “Spice Mobiles” has launched a new entrant named, “Spice Stellar Horizon Pro Mi-505” under it’s most prodigious range of smartphones series known as Steller Horizon. Adding one more gem to the range of Spice mobile phones which includes the Dual SIM phones – across GSM, CDMA, Tri-band & Touch Screen PDA and smart devices on Android platform at an affordable price tag. 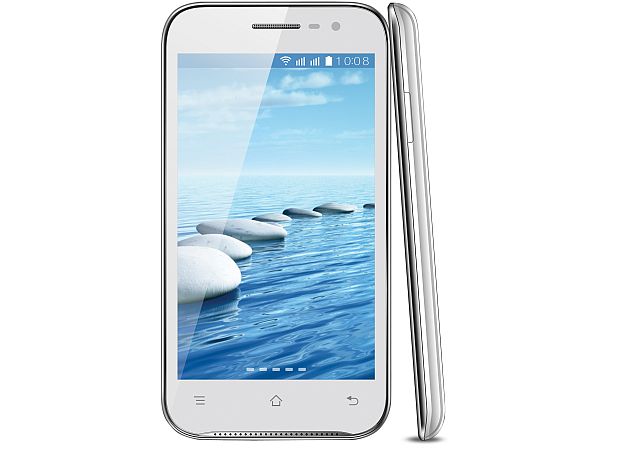 With Spice Stellar Horizon Pro Mi-505, company is strongly working to improve their position as a prominent player in the smartphone industry. And supporting the above stated statement, just to add here, Spice mobile was the first company in the country to introduce a 12 mega pixel camera phone with optical zoom feature. Keeping the facts figure of the company profile apart and rotating the nozzle towards the specification and detail of this newly launched smartphone, in terms of frame up, Spice Stellar Horizon Pro Mi-505 flaunts a huge 5 inch of Capacitive Touch screen display with 480×800 of pixel resolution, company has sticked with large screen mobile as they are now in preferred list of buyers. Dealing with it’s Platform dependency, this device sails on Android 4.0 Ice Cream Sandwich Operating System powered with a Dual Core processor at a clock speed of 1GHz. It is though discouraging that company has launched with an older version of Android, being a latest launch, they should have provided it with Android Jelly Beans.

Briefing it’s Storage specifications, Spice Stellar Horizon Pro Mi-505 is equipped with 512MB of RAM, 4GB of Internal memory which can be easily expanded up to 32GB via micro SD card slot.

Enumerating it’s Image Optics, this device is offered with both the primary and secondary camera. On it’s back, it is equipped with a primary camera rated at 5 MEGAPIXEL and on it’s front has a front facing camera rated at 1.3 MEGAPIXEL for video chatting. Some of the other features of camera include a Dual LED flash technology which enable the user to capture nice snaps even in the low light vision. Regular feature which we see in most of the Spice mobile device, this device also supports Dual Sim (3G+3G) with Dual Standby technology. Briefing it’s Connectivity features, it include 3G, WiFi,Bluetooth and a 3.5 mm Audio jack. Other features include GPS Navigator software, Facebook, pre-loaded Google and YouTube, FM radio and MP3 Player and many more.

Commenting on the launch, T M Ramakrishnan, CEO – Devices, S Mobility Ltd said, “We have received phenomenal success with Stellar Horizon Mi 500 launched last year. We have followed it up with this enhanced version with exciting features at a more attractive price point. We are confident the Horizon Pro will offer best value for money to its users.”

To make the life going on for this device, company has equipped this device with 2100mAh of battery. The Price of Spice Stellar Horizon Pro Mi-505 is Rs 8,499 and is available for sale. To attract more buyers towards this device, the company is also offering a free leather cover and a screen guard, worth Rs. 500 with the phone. It will be available across India through all major retail stores and through Saholic.com.