Spice mobiles, domestic manufacturer of smartphones and consumer electronics goods in India has launched a new entrant named as Spice Smart Flo Space Mi-354 in the Indian market. This new smartphone is an entry level range of smartphone packed with some nice features and specifications. The price of Spice Smart Flo Space Mi-354 is Rs 3790 and it will be available for sell very soon on all the authorized dealers and online retailers of the country. 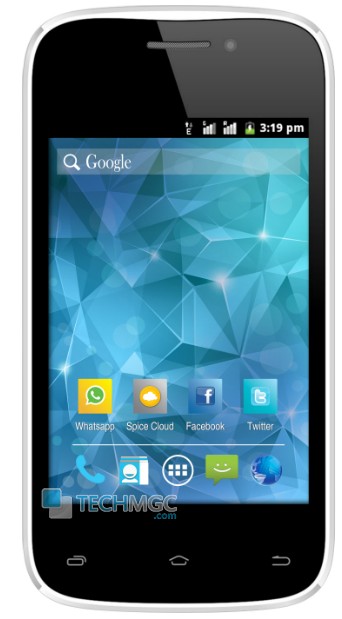 Spice Smart Flo Space MI-354 is the second smartphone launched by the company within a week. Recently, 4 days ago company announced Spice Stellar Glamor Mi-436, two quick launched now signifies that company is in a hurry to compete against the other domestic manufacturer like Micromax, Lava and Karbonn by upgrading it’s smartphone line up effectively. Eying towards the technical details and specifications of Spice Smart Flo Space MI-354, this device flaunts 3.5 inch of capacitive touchscreen display with 480 x 320 of pixels resolution. It supports Dual Sim with Dual standby technology which allows the user to gain access on two Sim’s all the time on a single handset.

Dealing with it’s platform dependency, this device sails on Android 4.2 jelly bean operating system powered with a dual core processor running at a clock speed of 1 GHz. Specifying it’s imaging optics, this device comes with both the primary and secondary snapper options. The primary camera is rated at 3 MEGAPIXEL of the back side allows the user to capture nice quality of snapshots whereas the secondary camera on the front is rated at 1.3 MEGAPIXEL for video calling/chatting. In terms of storage specifications, this device support 256 MB of RAM which could be the main drawback for this smartphone, internal memory is of 512MB which can be expanded up to 32GB via micro SD card slot.

Connectivity wise, this device lacks 3G but support a houses 2G, WiFi, Bluetooth, FM Radio and a 3.5 mm audio jack. To power it up, this device is equipped with 1450mAh of battery which claims to deliver 5 hours of talktime and 200 hours of stand by time.

However, with decent power and unmatched storage specifications will it be able to create a buzz among the tech geeks.