America based company, Nvidia headquartered in Santa Clara, California serving in semi-conductors industry worldwide has launched a new element in the arena of gaming console. This new device is named as, “Nvidia Project Shield” and it is available for pre-order at a price tag of $349. 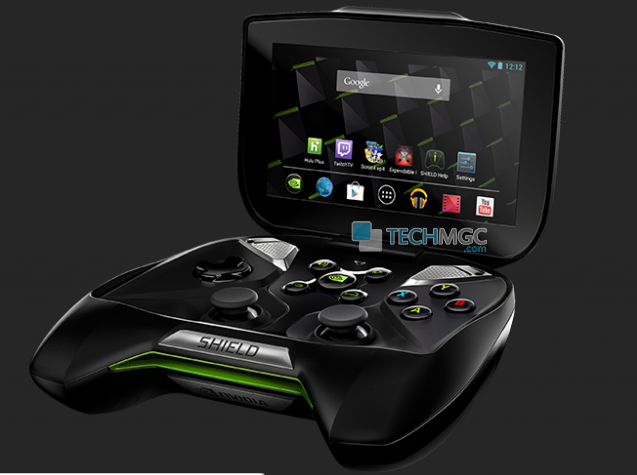 The Company has been a reputed player in terms of hardware worldwide and known for it’s quality products which includes graphics processors, wireless communications processors, PC platform (motherboard core logic) chipsets, and digital media player software. And now to add a more category in their manufacturing unit, company has introduced it’s first gaming console labeled as, “Nvidia Project Shield”. However, company has already unveiled details about Project Shield at the CES in January and now it’s show the availability of this console from 16 May onwards.

Giving a glance towards it’s overall specifications and details, Nvidia Project shield sports a nice decent screen with a Flip options. The Device had 5 inch 720p of display which is an comfortable size for any handheld devices. From it’s Software front, as we all know Android is the leading pioneer in terms of operating system worldwide. And the same fame has been seen for this device. This device also sails on Android latest operating system i,e Android 4.2.2. To compensate the software specification of this device, company has powered this device with Nvidia Tegra 4 processor. Tegra is basically a processor series designed by the company specifically for mobiles and tablets with high graphics and computing ability with lesser power consumption.

This nice small device includes two analog sticks, four face buttons, four shoulder buttons, HDMI output, 2GB RAM, 16GB of storage, and stereo speakers. Added by the company, ” When not playing its own games the Shield can also be used as a controller for other consoles and can stream games to a desktop computer”.

Incorporating this device with 2GB of RAM and 16 GB of Internal storage, it will fascinate a lot of buyers interest towards this device. It is basically a unique take on a portable gaming console that combines the power of Android with streaming technology to offer both mobile and triple A console class titles on a single platform.