Zen Mobile, a pioneers in bringing the most affordable mobile handsets to the Indian shores equipped with the advanced technology has announced it’s new element in it’s premium series of Ultra Phone as,”Zen Ultra Phone U4″ to enhance it’s portfolio and to resemble as it’s carved figure as a tough companion in the Indian market. 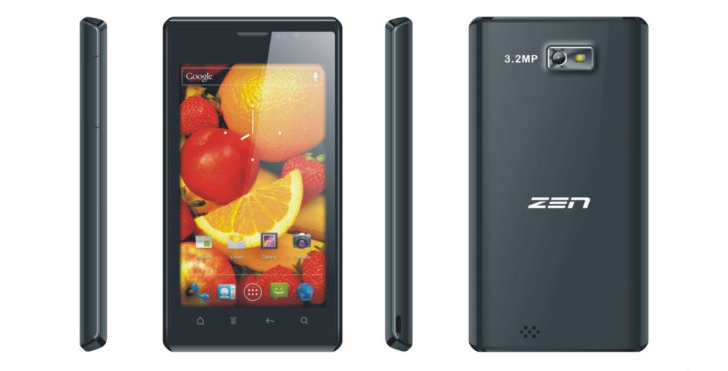 Zen Ultra Phone U4 can be considered to be the successor of Ultraphone U1 as Zen Mobile launched it’s range of Android tablets under UltraTab. Zen Ultra Phone U4 features 4.3-inch TFT capacitive touch screen display, with 800 × 480 pixels resolutions. It seems to be equipped with nice resolutions power since most of the Smartphones have rearranged the pixel density charts this year. Recapitulating it’s platform dependence, this device runs on Android 2.3 (Gingerbread) Operating System (which is quite an older version as most of the recently launched devices powered with the latest Android v4.0 version and do come with a Dual core Processor’s) powered with a single core processor clocked at 1 GHz. As with all Zen Mobiles this device is also dubbed with a Dual SIM support (GSM+ GSM) with Dual Standby. Specifications towards it’s Body Dimensions, this device weigh 90 gms enabling the user to experience a bit lighter and portable device. In terms of Image Optics, this device boasts a moderate 3.2 MEGAPIXEL primary camera with LED flash (which is now quite common even in low end devices) and a secondary camera implanted at 0.3 MEGAPIXEL.

Itemizing it’s Connectivity aspects, Zen Ultraphone U4 support 2G (GSM 900 / 1800 / 1900 MHz), WiFi 802.11 b/g/n, Bluetooth with A2DP. In terms of Storage, this device is equipped with 512 MB of internal memory which can be expendable upto 32 GB via micro SD slot, it also support 3.5mm Audio Jack, FM Radio with recording. In term of Battery, this device comes with 1500 mAh battery which lacks in capacity as compare to other companions already available in the market.

This Device includes some of the pre-loaded applications like Skype, Facebook, G-talk, MapMyIndia navigation app, Cricbuzz, nexGTV with Live TV, Loop Channels & VOD support and Ganesha Speaks astrology app. The Zen Ultraphone U4 is priced at an MRP of Rs. 6,499, but it is available for as low as Rs. 5,999 from their official partner HomeShop18.