Kobian, one of the leading company serving in consumer electronics worldwide has just launched it’s two new element named, ” Mercury mTAB7G and mTAB Lite” in the tablet segment of India. Mercury is a brand under which Kobian sells it most prodigious range of tablets, mobile phone and almost all kind of consumer electronics devices. 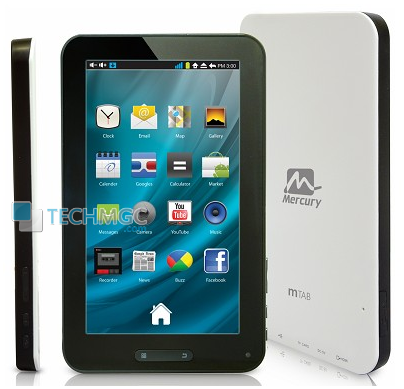 Out of the race course of Smartphones and tablets industry for a quite longer period of time , Kobinan is finally making it’s way back to compete with other manufacturers in the gadget industry with above mentioned two tablets. Basically, Kobian is well known for it’s wide range of products including computer parts, power products, consumer products, surveillance system, mobiles, accessories and memory products. Shifting the way towards specifications of newly launched tablets and picking the first one in the line up, Kobian Mercury mTAB7G flaunt 7″inch of TFT Capacitive Touch Screen display with 800*480 of pixels resolution. This device has 16:9 of aspect ratio. In terms of dimensions, Kobian Mercury MTAB7G weighs 0.30kg and measures 190mm x 115mm x 10.8mm. It looks pretty heavy as per it’s weight and overall dimensions. Dealing with it’s Platform dependency, Mercury mTAB7G sails on Android 4.0 Ice Cream Sandwich operating system powered with a Single core Cortex A8 processor at a clock speed of 1.2GHz. This device also supports SIM slot for 2G/3G voice calling.

In terms of Storage specifications, it is equipped with 512MB of DDR3 RAM, 4GB of Internal memory. To please the customer if he wishes to increase the memory unit for this device, it has been installed with a micro SD card slot through which memory can be expanded up to 32 GB. Briefing it’s Connectivity specifications, this device supports 2G, 3G 7.2 Mbps HSDPA, GPRS with EDGE connectivity. Wi-Fi IEEE 802.11 b/g/n, Adobe Flash 11.1 online video and a 360 Degree Gravity Sensor. It also support mini USB and a 3.5 mm Audio jack.

Shifting the spot-light towards the second one in the line up, Mercury mTAB Lite which sports the same display specifications as we mentioned just above for mTAB7G in this article. It also sails on the same operating system which is Ice Cream Sandwich Operating System but receives power via Vimicro Cortex A8 processor at a clock speed of 1GHz. 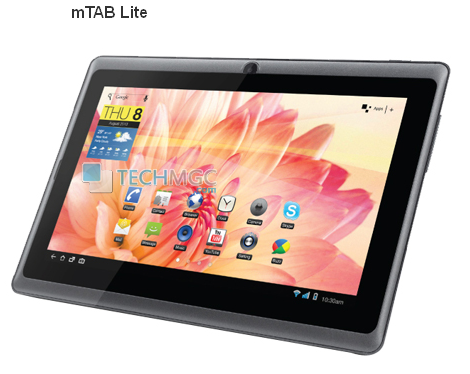 However, this device is lighter in weight as compare to mercury mTAB7G and weighs 320 gms. In terms of connectivity, it support the same specifications as we mentioned above for mTAB7G except 3G. To power it up, it has been installed with 2700 mAh of battery. As of now, there is no official information available regarding it’s price tag.