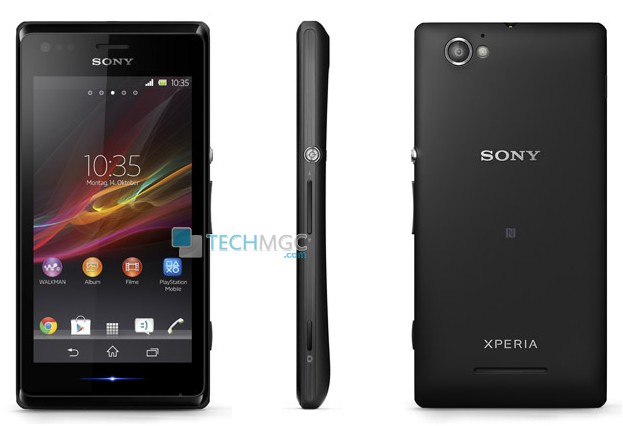 Information regarding their prices and availability is yet to be disclosed. However, from our sources we came to know that both the Smartphones Sony Xperia M and M Dualwill launch probably in the Q3’2013. It is also rumored that both the Smartphones Sony Xperia M and M Dual will be available in affordable ranges of Smartphones. Coming back towards the specifications of the first one in the line up, Sony Xperia M will sports a decent 4.0 inch TFT LCD FWVGA Touch Screen display with 480×854 pixels resolution. To protect the screen from scratches and dust the display screen is protected with Dragon Tail glass. Both the Smartphones uses Sony’s OmniBlance design which has been used by the company in their high price range of Smartphones.

From the Software front, Sony Xperia M will sails on Android 4.1 Jelly Bean Operating system and on the hardware front this device will run on Dual Core Krait 200 Qualcomm MSM8227 Snapdragon S4 Plus(aka Snapdragon 400) processor at a clock speed of 1GHz. It also support Adreno 305 GPU. This is same hardware configuration which is seen in most of the Nokia Lumia series powering Windows Phone 8 smartphones.

Commenting on the launch, Calum MacDougall, Director of Xperia Marketing at Sony Mobile Communications, said, “Consumers looking for their first steps into the world of Xperia smartphones, would be well-advised to look at Xperia M or Xperia M dual. Both models benefit from Sony’s proven innovation and engineering expertise, and are perfect for those who want the premium technology and experiences often only associated with high-end models.”

In terms of Storage specifications, Sony Xperia M is equipped with 1GB of RAM for smooth multi-tasking, 4GB of Internal memory in which 2.8GB is for user-accessible. It also supports a micro SD card slot through which memory can be easily expanded up to 32 GB. Briefing it’s Photography specifications, Sony Xperia M is offered with both the primary and secondary options. On it’s back it include a primary camera rated at 5 MEGAPIXEL with a dedicated shutter and on it’s front it has been installed with a front facing camera fro video chatting. Some of the other features of camera includes Autofocus, LED flash, face detection, smile detection and Image stabilization techniques. Apart from clicking nice snapshot with such amazing camera features it also records video at 720p@30fps.

Sony Xperia M will be available in Black, White, Purple and Yellow colors. To power it up, this device is equipped with 1750mAh of battery with a STAMINA mode increases battery life by a fair extent.

Shifting the shaft towards the second one in the line up, Specs are identical in both the variants apart from the fact that the dual sim variant Sony Xperia M Dual will have dual IM card slot and feature dual standby nature.

Let’s see when both these mobile make their way to market. Price as per out speculation will be around 14,000 for single sim variant and a thousand bucks higher for Dual Sim variant. Though, these are speculated so actual prices may vary.