Toshiba Corporation, japanese multinational engineering and electronics conglomerate corporation headquartered in Tokyo, Japan has launched a new and fresh series of tablets. This new series is named as Toshiba Excite and it contains three power pack tablets. These three tablet are named as Toshiba Excite Pure, Excite Pro and Excite Write.All the tablets are likely to be shipped out by June 25th 2013 and they will be available for sale directly from company official website. 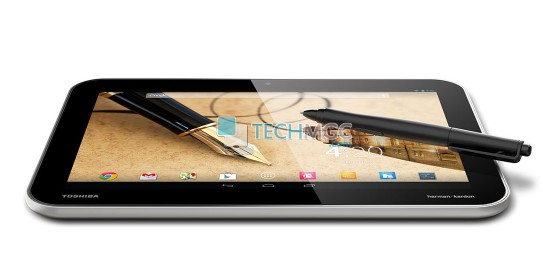 Toshiba Excite Pure is available at the lowest price tag of $299 (approx. Rs. 16200) among these three tablets and the first one ie. Toshiba Excite Pure equipped with a basic tablet specification. In terms of display, it sports 10.1 inch of Touch Screen display with 1280*800 of pixel resolution. Dealing with it’s Platform dependency, this device sails on Android 4.2.2 Jelly Bean Operating system powered with Nvidia Tegra 3 processor. In terms of Photography specifications, this device is offered with a single camera options which has been installed at the front. This front-facing camera is rated at 1.2MEGAPIXEL for video chatting. Specifying it’s Storage, it also offered with 16GB of onboard storage. The storage on the tablet can be expanded through a microSD card slot. The device offers connectivity through Micro-HDMI and Micro-USB.

Second one in the line up is Toshiba Excite Pro which is supposed to be a premium Android tablet. In terms of display, same display screen size of 10.1 inches but it sports a higher resolution of screen size which is 2560×1600 of pixel resolution. Dealing with it’s Platform dependency, this device sails on Android 4.2 Jelly Bean Operating system powered with Nvidia’s new Tegra 4 processor. This device is offered with both the primary and secondary snapper options. On it’s back, it include a primary snapper rated at 8 MEGAPIXEL and a secondary camera rated at 1.3MEGAPIXEL for video chatting. In terms of Storage specifications, this device comes with 32Gb of on board storage and supports dual Harman Kardon speakers. Briefing it’s Connectivity specifications, this device offered with Micro-HDMI, Micro-USB, and microSD ports. The price tag of Toshiba Excite Pro is $499 which may cost around Rs. 26900 .

Third and the the high end variant is named as Toshiba Excite Write which houses specifications similar to the Excite Pro, the Excite Write. Like the name suggests it let you ‘write’ with the Wacom digitizer that comes with the tablet. The tablet currently comes with only one app to make full use of the stylus, Toshiba’s own TruNote note-taking app. The price of Excite Write is about $599 which makes it a costly affair.

The writing abilities of the 10.1-inch tablet make it a direct competitor to the Samsung Galaxy Note 10.1. However, when compared to the Note series that has software that supports the S-Pen functionalities, the Excite Write might not turn out to be so exciting.

Overall, all three tablets are nice device running on Nvidia Tegra platform. For more information on technology, Stay tuned with us.