Another chinese manufacturer joins the club of the cheapest quad core powered devices in the Indian gadget industry. AllFine a well known Chinese manufacturer serving in electronics industry has launched the cheapest quad core tablet named as AllFine Fine7 Genius and is available for sale on Pandawill.com at a price tag of $88 (around Rs. 4800) only. 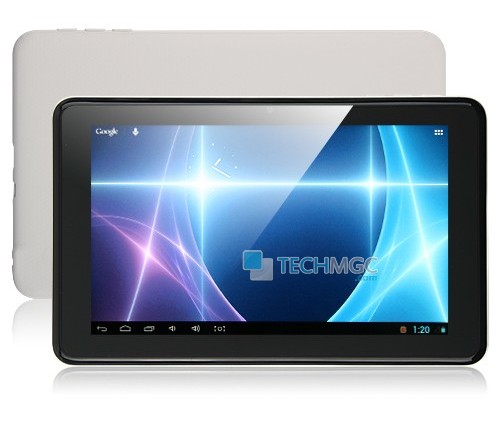 Just a few weeks ago, Lava had introduced it’s cheapest quad core powered smartphone named as Lava iris 458Q at Rs 8,500 which is currently the least expensive smartphone in the Indian gadget industry and now AllFine has became the first company to introduce a tablet with Quad Core processor at just just $88. Coming towards the specifications of ALLFine Fine 7 Tablet, it flaunts a 7 inch of IPS, LCD Capacitive Touch Screen display with 1024 x 600 of pixel resolution which supports nice 178° of visible angle. Dealing with it’s Platform dependency, AllFine fine7 Genius Tablet sails on Android 4.1 Jelly Bean Operating system powered with a Cortex A7 Actions ATM 7029 Quad Core processor at a clock speed of 1.5Ghz. And on graphic front, it has been powered with Vivante GC1000 GPU which looks quite impressive.

This device is quite portable and easier for use and weighs 300gms and measures 190 x 118 x 10.4mm in terms of overall dimension. In terms of Storage specifications, this device is equipped with 1GB DDR3 of RAM, 8GB of Inbuilt memory. To further expand the memory, this device is equipped with TF card support through which memory can be easily expanded up to 32GB. Briefing it’s Photography specifications, this device includes a front facing camera rated at 0.3MEGAPIXEL, however it lacks a primary camera. Enumerating the Connectivity specifications for this device, it includes 3G but via Dongle, WiFi 802.11b/g/n, Email, Browser, OTG, mimi HDMI port, mini USB port, 3.5mm Audio jack and gravity sensor. And the dongles thosse are compatible with this device to support 3G includes ZTE AC2736, HUAWEI E1750, HUAWEI EC122, HUAWEI EM770W.

Some of the other applications it include ES File Explorer , Google Search, Google Maps, Browser, Gallery, Clock, Market, Calculator, Calendar, Video, Email and Gmail. To make the life going on for this device, it is equipped with 3600mAh of battery which delivers work time up to 5-6 hours.

With such high and comparable specifications at such a low price tag it we can expect to have cheaper devices coming with more powerful features and hardware soon in future. Though AllFine has no network etc in India but definitely it can help to make pricing even more competitive in the country.

For more information on technology, Stay tuned with us. !–more–