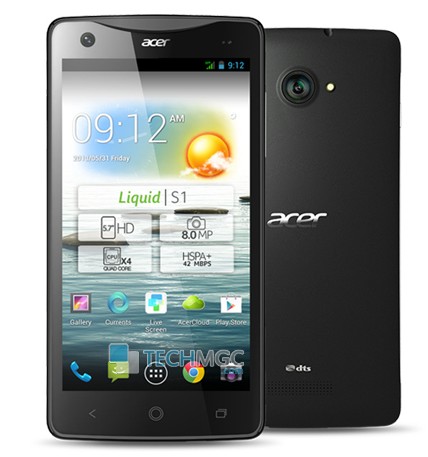 Just ahead of this year’s Computex, the company unveiled its Liquid S1 phablet worldwide. COMPUTEX Taipei or Taipei International Information Technology Show is a computer expo held annually in Taipei, Taiwan and it has become one of the largest computer and technology fairs in the world. Now coming back towards the newly announced device, Acer Liquid S1 which sports a huge 5.7 inches of HD Capacitive Touch Screen display with 1280 x 720 pixel resolution. The huge pixel resolution of this device will blenders the display with 317.47 ppi of pixel density. Dual SIM support, the feature which most of the domestic as well as international manufacturers offers in their devices, acer has also powered this device with Dual Sim with Dual Standby (GSM+HSDPA) support.

Dealing with it’s Platform dependency, Acer Liquid S1 runs on Android v4.2 Jelly Bean Operating system powered with a MediaTek Quad Core processor at a clock speed of 1.5GHz. In terms of Storage specifications, this device is equipped with 1GB of RAM, 8GB of Internal memory. To expand the Internal memory more, this device is also equipped with a micro SD card slot through which memory can be easily expanded up to 32 GB. Briefing it’s Photography Specifications, Acer Liquid S1 is offered with both the primary and secondary snapper options. On it’s back it include a primary camera rated at 12MP and on it’s front it includes a secondary camera rated at 2MEGAPIXEL for video chatting. It also supports 1080p of video recording. Some of the other camera features, which acer has offered in their devices to enhance the photography experience includes LED flash, Autofocus, Video calling, Geo-tagging, 88° wide viewing angle for video calling.

One of the unique features in this phone is on the top of Android is a “Float User Interface”. In this feature, user press a key that brings up a “Float Apps” shortcut – from there they will be seeing apps on a transparent screen floating above whatever app is open. With this function you will be able to work with a limited number of apps that can be open and used above your main app in a sort of “ghost” mode: maps, calculator, notes, and your main camera.

To make the life going on for this device, it has been equipped with 2400mAh of Li-Ion battery. The Price of Acer Liquid S1 in UK is £281 and in Eurpoe is €329 approximately.