Lava Mobiles has launched their another entry level smartphone by introducing Lava,”Iris 430″ in the Indian market. Generally, Friday is considered a day when people rushes to movie theaters for latest movies. However, Lava is surely making every Friday a blockbuster by new launches. 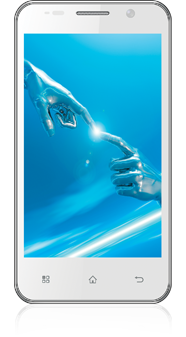 It is another element in Lava’s premium line-up of Smartphone series named as,”IRIS”. Defining it’s Frame Up Specifications, Lava Iris 430 sports a descent a 4.3 inches WVGA display which can be operated smoothly through capacitive touch input, it baptizes 480×800 of pixel resolution and also supports 16M colors. In terms of it’s Platform dependency, this device runs on Android 4.0.4 Ice Cream Sandwich Operating System with TouchWiz UI powered with a Dual Core Processor clocked at 1 GHz, 512 MB RAM is slotted to ensure speedy actions. As usual, their Standard Feature, this device is also dubbed with Dual Sim with Dual Standby technology. In terms Photography, Lava Iris 454 it comes with a 5 MEGAPIXEL of primary camera with Autofocus, HDR, Panorma, Face detection techniques with a recording maximum at 30 frames per second, with a secondary VGA front-facing camera for video calling.

Enumerating it’s Storage Specifications, Lava Iris 430 supports 4 GB of internal memory which can be easily expanded upto 32 GB via micro SD card slot. Briefing it’s Connectivity specifications, it supports Wi-Fi, 3G, GPS, Bluetooth and a microUSB, Google Play Store. To power it up, it will be equipped with 1400 mAh of battery with around 4 hours of talktime and up to 390 hours standby time approximately.

However, there are no words about price and availability from any official sources, however we expect to be priced around Rs. 7000 .