Another low Budget android powered Smartphone introduced by country’s one of the finest budget mobile phone maker Celkon Mobiles named,”Celkon A225″ in the Indian market. Celkon A225 packed up with some exciting features and high-end specifications for budget constraint buyers. 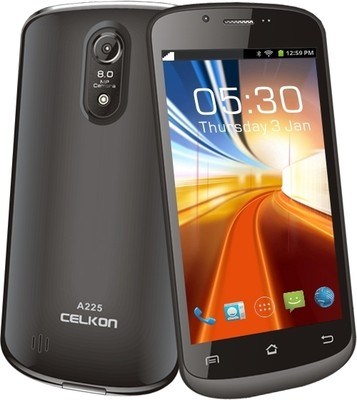 Celkon A225 is a new entrant in an entry level budget android smartphones introduced by the company. Speaking towards it’s Specifications, Celkon A225 sports with 4.7 inches FWVGA IPS Capacitive Touch Screen Display with 480 x 854 pixels resolutions. Under the hood, this device runs on Android 4.1 Jelly Bean Operating System powered with a Dual Core Processor clocked at 1GHz. Celkon A225 comes with Dual SIM (GSM+GSM) and Dual Standby technology (2G Network GSM 900 / 1800 -SIM1 & SIM2). In terms of Photography, this device offered with both the primary and secondary camera- 8 MEGAPIXEL of primary camera and a 2 MEGAPIXEL of front camera assimilated with video recording (let’s hope 8 MEGAPIXEL offered should be promising enough this time as most of the budget phone buyers were not satisfied with it 8 MEGAPIXEL of primary camera). Briefing towards Connectivity, it support 3G UMTS 2100 MHz, Wi-Fi, GPS, Micro USB, 3.5mm jack and Bluetooth, 3D-Sensor, G-Sensor, USB and 3.5mm Audio Jack.

Defining Battery Specifications, it houses 2100mAh of battery which will deliver 5-6 hours of talktime. Some of the other features it include SNS integration, Document viewer, Photo viewer/editor, Organizer, Voice memo/dial, Predictive text input.

The price of Celkon A225 is Rs 9,099 and it is available on all the online retailers across the country.