Globally reputed brand Alcatel, also a premium mobile phone maker who has been absent for a quite while in country and hadn’t participated much under the race of evolution in technology has finally rolled out it’s two new entrant in the smartphone market namely , “Alcatel OT 5020E and Alcatel OT 4005D”. 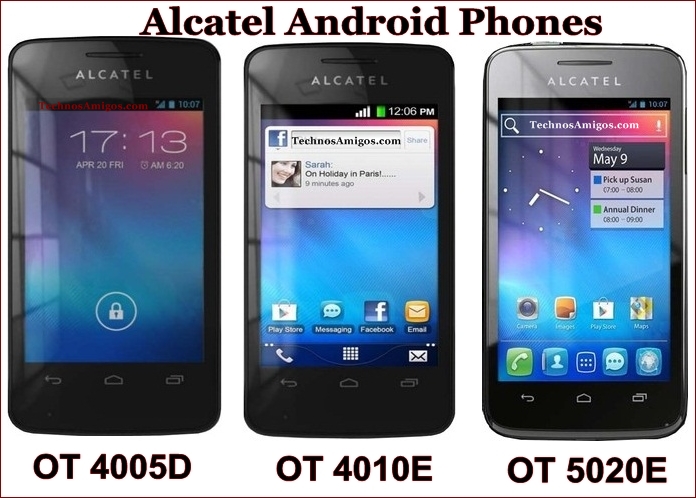 From the two, the Alcatel OT 4005D is available with a compact screen size of 3.5 Inches HVGA Capacitive Touchscreen Display with 320 x 480 Pixels resolutions dazzled with Single layer Gesturing. Elucidating it’s Platform Dependency, Alcatel OT 4005D runs on Android v2.3 Gingerbread Operating System powered with a Single Core Processor Clocked at 1 GHz. Alcatel OT 4005D has support for Dual Sim (GSM+GSM) technology. Viewing it’s Dimensions, Alcatel OT 4005 D is 12.2 mm in thickness. Enumerating the Storage Specifications, this device has been assimilated with 1.4 GB Internal memory which can be expanded up to 32 GB via micro SD card slot and has a 512 MB RAM and 4 GB of ROM, though it is surprising to see that even with such specification , Alacatel has preloaded it an older version of Android (2.3 gingerbread) . In terms of carved figure statistics, this device bagged up with a single primary camera placed at 3.2 MEGAPIXEL and it can record 640×480 pixels video at 30fps, however the device lacks the front camera.

Briefing the device Connectivity Specifications, it supports WiFi 802.11 b/g/n, A-GPS with Google Maps supported via Navigation technology, Bluetooth v4 (latest version) and support profiles via A2DP, 3.5mm Audio Jack and a micro USB support. To power it up, a 1400 mAH of battery is amalgamated which claims to deliver Talk Time up to 12 hrs (2G), 6 hrs (3G), and Standby Time up to 400 hrs (2G), 300 hrs (3G), however, company has provided its 3G talk time backup however, there is no solid information whether it supports 3G or not. Some of the other features it includes GSensor, proximity and light sensor and some pre-loaded applications such as Facebook and many more.

The Price of Alcatel OT4005D is Rs 4,499 and it is will be soon available for sale in all the leading online retailers across the country.

Speaking about it’s Display Specifications, Alcatel 5020 E virtue a 4 inches of Capacitive Touchscreen WVGA with 800 x 480 of pixels resolutions. Alcatel 5020E is assimilated with Android 4.0 Ice Cream Sandwich Operating System powered with a Dual Core Processor clocked at 1 GHz. This device is also incorporated with the same Dual Sim (GSM+GSM) technology with DualStandby which is also there in OT 4005D model. In terms of Photography, Alcatel 5020E support both the front as well as rear camera – a 5 MEGAPIXEL of rear camera and 0.3 MEGAPIXEL of secondary camera, it also comes with Flash Light and Fixed Focus technology helping user to capture nice images in low light too.

Viewing Memory and Storage Specifications, Alcatel 5020 E is equipped with 1.4 GB of internal memory which can be expanded up to 32 Gb via micro SD card slot, and the same 512 MB of RAM and 4 GB of ROM is consolidated as the OT 4005D model. However, RAM is a bit disappointing element it should be nearby 1 GB as now most of the budget high end phone are being launched with higher RAM. Specifying it’s Connectivity, this device support 3G and claims to output 7.2 Mbps HSDPA; 5.76 Mbps HSUPA downloading speed, Wifi 802.11 b/g/n, A-GPS, with Google Maps, Bluetooth (v4.0) Supported Profiles (A2DP), DLNA.

It will be soon available for sale at all the online retailers across the country. It seems both the smartphones are powered with decent technical specifications and it will be interesting to see how both these gadgets will embarked their presence where similar products are available already in the competition.