Another blast in the tablet market of India by one of the leading domestic manufacturer, “Karbonn Mobiles” has now launched a new tablet named, ” Karbonn TA-FONE” A34 in the Indian market. The tablet is priced at Rs 7,290 and is available for sale on Infibeam. 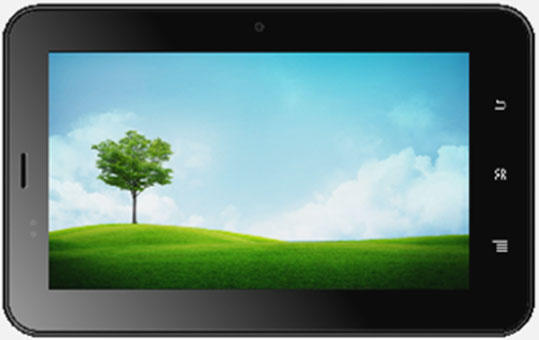 Just a day ago, Karbonn had launched Karbonn SmartTab A37 in the market and now with the launch of Karbonn SmartTab A34 it looks like company has desires to reach the top position in the gadget hub of India. Coming to it’s Specifications, in terms of frame-up the device sports with 7 inch of TFT Capacitive touch screen display with 800 x 480 of pixels resolutions. It also supports Dual SIM (GSM + GSM) with Dual Stand by technology which is now incorporated as a standard feature in most of the newly launched devices. Karbonn TA-FONE A34 runs on Android 4.0 Ice Cream Sandwich Operating System powered with a Single Core Cortex A9 processor clocked at 1 GHz. In terms of Storage Specifications, this device equipped with 512 MB of RAM, 4GB of Internal memory which can be expandable up to 32 GB via micro SD card slot. In terms of Connectivity, Karbonn TA-Fone A34 support 2G via SIM card slots, WiFi 802.11 b/g/n, Bluetooth, micro USB and a 3.5 mm Audio Jack but somehow lacks 3G support.

To Power it up, this device is well equipped with 3000 mAh of battery with 6-7 hours of talktime.