Karbonn, one of the leading domestic company serving in electronics industry has launched a new element named, ” Karbonn Smart Tab A37″ in the Indian market. Since other Indian brands are making their mark in the market, it looks like karbonn doesn’t wan’t to stay much behind. 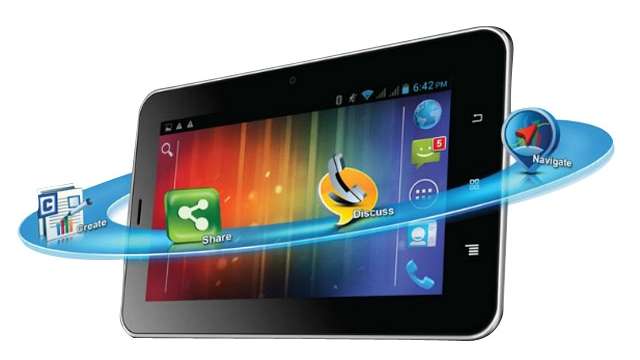 Karbonn Smart Tab A37 is another product in it’s Smart Tab line up. Coming to it’s Specifications, Karbonn Smart Tab A37 sports a descent 7″ Capacitive touchscreen display with 800×480 pixels resolutions. Dealing with it’s Platform dependency, this device runs on Android 4.1 Jelly Bean Operating system ( which is the latest version of Android OS ) powered with a Dual Core processor clocked at 1 GHz. In terms of Storage, Karbonn Smart Tab A37 support 512 MB RAM, 4 GB of Internal memory which can be expanded up to 32 GB via micro SD card slot. Briefing it’s Connectivity support, this device support 3G, Wi-Fi, USB, 3.5 mm audio jack, Bluetooth. However, it lacks HDMI port. Enumerating the device Image Optics, Karbonn Smart Tab A37 offered with a primary camera rated at 2 MEGAPIXEL and a secondary camera rated at 0.3 MEGAPIXEL. One of the most starring feature which added advantage to it, is it’s Dual Sim (WCDMA+GSM)technology which supports voice calling.

To power it up, Karbonn Smart Tab A37 equipped with 3000 mAh of battery with 6-7 hours of talktime. The Smart Tab TA Fone A37 also boasts of support for a large array of video formats including AVI, MP4, 3GP, FLV, WMV, MKV and MPEG and Audio formats including MP3, WMA and WAV. Inside the packet, it includes a tablet, Battery, Charger, Data Cable, User Manual and a Warranty Card.

The Price of Karbonn Smart Tab A37 is Rs 9,490 and with such a price tag it will definitely gave a tough fight against all the leading tablets available at the same price tag.