Good news for Micromax fans, it is high on news once again, they have recently shown teaser video for the upcoming Micromax Canvas 4 phone. It would be an high end phone from Micromax which will be expanding footprint of their most popular Canvas range of smartphones. 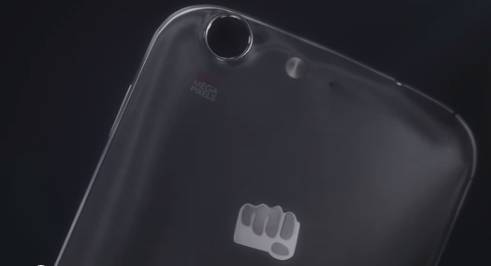 With the Canvas series of smartphones, Micromax have gained a significant share of market in the country and seeing the teaser of their upcoming Micromax Canvas 4, they have already gained a lot of attention. So far there is no concrete information available for this phone, all we have duo of teaser released on Youtube which were shown during overs between recent India-Pakistan cricket match.

So far from speculation, phone is supposed to be with 1080p resolution and from video we noticed it will be a 13MP camera phone with ofcourse LED flash. As from the name ie. Canvas 4, it should be on higher side as compared to their previous launches , specifically the Micromax Canvas 116 HD. We are hoping to see it on premium side with price range of Rs. 20000 to 25000 as per rumours and if they are true then it will be powered with 2GB RAM, 16 GB internal storage and full HD screen.

Unlike other Indian brands, Micromax has gained a lot of trust with launch of Canvas series, now Micromax is counted among top mobile handset brand in India. They are generally first among Indian / domestic brand to come up higher end features. It was true with the launch of Micromax Canvas A110 when they brought dual core processor powered handset in India under Rs. 10000 pricing, however they were soon followed by many domestic manufacturers and now almost all of them have their dual core phones. Then they repeated same with Micromax A116 HD, which was again first quad core processor phone from budget manufacture, it was again followed by other brands.

Hence from their previous legacy of being first among domestic manufacturers, it could be Octa-Core phone also but seeing the reports and news that MediaTek is not very keen in octacore chips, chances are faint for Micromax Canvas 4 to be an eight core powered phone, but we never know.

On the other side, rumors are strong that this device is rebranded version of Blue Life One phone and knowing the facts that Micromax does sell various rebranded phone in India, it can be true that this one is Blue Life One. Though there are no confirmations but giving glimpse to Blue Life One phone, the design of both phone is identical from what so far we have seen, Blue Life One is also packed with 13MP camera, it has similar rounded corners with metal strip and exact location of flash light, camera. So if rumours is to be believed, and if it is indeed rebranded Blue Life One phone then it will have only 1GB RAM, will be powred by quad core processor running at 1.2 Ghz. Will have 5MP front camera along with 13MP rear camera. ON display side , it would have 5″ inch display with 720×1280 px resolution and a 2000 mAH battery.

But then it won’t make sense because already Micromax Canvas 116 HD posses similar feature apart of camera which is 8MP in it. We hope like their previous launches, they have something new for us which can again give budget conscious users a big small.

Like others we are also looking for full details, we will update you as soon as we get official technical specifications, meanwhile , what do you think, will it be able to create buzz again as we had seen in with launch A116, A110 from Micromax ?