Chinese electronics giant, Huawei Corporation brings the phablet craze to absurd new heights by announcing a new Android tablet that allows consumers to make voice-calls directly from the tablet. This new tablet will be shipped inside the company’s one of the most hit range of tablet series familiar to us as Media Pad . Information regarding it’s launching is still under covers but as per the company officials it will be initially released in China followed by other markets somewhere in the Q3 of this year. 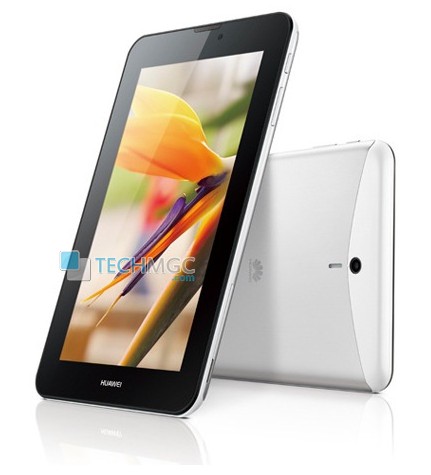 The MediaPad 7 Vogue provides the perfect mix of functions from a tablet, smartphone and entertainment center in one stylish and portable device. Coming towards it’s specifications, Huawei Media Pad 7 is built with strong and sleek aluminum metal uni body design. Media Pad 7 is damn ultra light, compact and measures 9.5mm in overall thickness and weighs only 335 kg which makes it quite portable and easier to use. In terms of frame up, this device sports a standard 7 inch of LCD Capacitive multi-touch screen display with 1024 * 600 of pixel resolution. This huge pixel resolution makes the display more clear and brighter by delivering 139 ppi of pixel density. It also supports multi-touch screen display with full view-angle and vivid display, offers a dazzling visual experience to bring your photos and videos to life.

Dealing with it’s Platform dependency, this device sails on Android 4.1 with Emotion UI operating system powered with a Hi Silicon quad core processor at a clock speed of 1.2 Ghz. The latest in Huawei’s range of products that make great technology accessible. In terms of Storage specifications, this device is equipped with 1GB of RAM, 8GB of Internal memory which can be easily expanded up to 32 GB via micro SD card slot. Offering seamless connectivity, the MediaPad 7 Vogue’s Micro USB port is compatible with a full-range of accessories including an external keyboard, mouse and USB flash disk, while the Bluetooth, Wi-Fi, and Air sharing functionality allow for swift content sharing wherever you are. The 3G module supports DC-HSPA+, and downlink speed can reach up to 42Mbps, and the Wi-Fi connection supports 802.11b/g/n for fast streaming of movies or videos.

One of the most starring feature for this device it includes “a built-in receiver for direct calling capabilities that remove the need for headphones,” according to the company – if you don’t feel silly holding a 7-inch tablet up to or in front of your face. Enumerating it’s photography specifications, it houses with both the primary and secondary snapper options. On it’s back side, it allow the user to capture nice snapshots with 3MEGAPIXEL rear camera support while on the front side offer a 0.3 MEGAPIXEL camera for video chatting.

The Huawei Mediapad 7 Vogue will be available in both black and white. In terms of power house, this device draws power from 4100 mAh of battery.

As per the given the specifications of the tablet, we anticipate attractive pricing, probably around $200-250.