HP Corporation, an American multinational information technology corporation headquartered in Palo Alto, California, United States showed up a new entrant from it’s desktop/tablet hybrid series familiar to us as HP Slate that dodges over the Intel and Windows running devices at an event in Beijing. Company has announced it’s first android powered all-in-one pc tablet named as HP Slate 21 packed with some nice features and specifications.

From the announcement of HP Slate 21 , it looks like company has finally aimed to expand it’s all-in-once PC’s portfolio in the Android Arena too. As per the company officials, the HP Slate 21 all-in-one pc is expected to be available in the U.S. around September, with a starting price of $399. However, there was no information provided by the company regarding it’s launch in India. Coming towards the specifications and technical details of this gigantic device, it will sports a huge 21.5-inch IPS full HD touch screen display with 1920 x 1080 pixel resolution. This wide range of pixel resolution make the display more crispier and crystal clear by blending 103.4ppi of pixel density. With 21 inches of screen size it allows to share the screen with more than one person, whether you prop it up by its memory hinge (between 15 and 70 degrees) or lie it flat on a table.

“Customers are looking for technology that simplifies their lives while keeping them connected to the entertainment they enjoy and the content they need,” said Jun Kim, vice president and general manager, PC Displays and Accessories, HP. “The HP Slate21 allows families to easily access content through the cloud and enjoy it together on a large, interactive screen.”

From the software and hardware front, HP Slate 21 sails on Android 4.2.2 Jelly bean operating system powered with a quad-core Tegra 4 processor. In addition, it’s not designed to lay completely flat — its kickstand lets it sit at a 30-degree angle for tablet usage or upright to be used in the more traditional desktop mode. There are built-in dual speakers, a webcam, and wireless printing capabilities. HP also talked up the multi-tasking capabilities of Android, allowing users to listen to music while surfing the Web. In terms of storage specifications, it is rumored to come with 8GB of on-board storage, but we can expect it with an micro SD Card slot and comes with three USB 2.0 ports so you can plug in an external hard drive to expand its capacity. It also offers Wi-Fi and Bluetooth connectivity. The all-in-one comes with a keyboard and mouse out of the box. 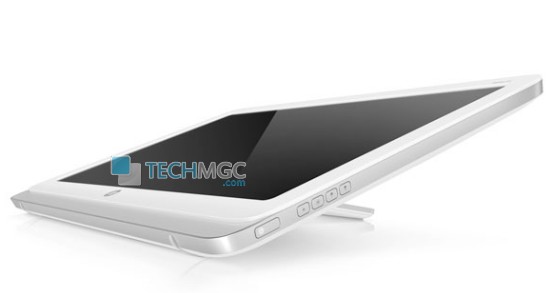 Some of the highlighting feature of this device is it support built-in DTS Sound technology which offers a rich concert-like experience. It comes pre-installed with an HP TrueVision HD Webcam and Wireless Direct which enables users to share videos, photos and data between devices without the need for a network connection.

With $400 it a true value for money product. However, HP provides a huge range of products ranging from technologies, software, solutions and services to consumers, small- and medium-sized businesses (SMBs) and large enterprises, including customers in the government to the health and education sectors.