We never had so much of choices and launches in mobile handset segment as we see today. Now we have handset available for almost all kind of unusual combination you can think of. The new offering A25 from Karbonn is in same line, its a large screen smartphone i.e. a phablet but in budget price range with little compromise in feature list ie. it lacks 3G. 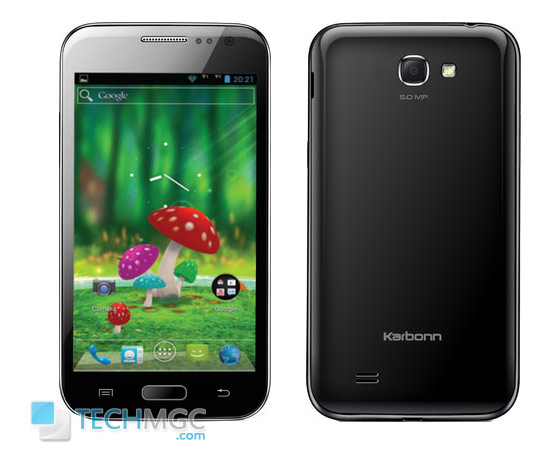 Karbonn has launched new Dual Core budget handset Karbonn A25. It is direct rival of previously launched Viva A72 from Micromax as both phablet have large screen but crucial feature ie. 3G is missing in the handset. Already Viva A72 is out of stock at various retailers online so it is obvious Karbonn is trying to take advantage by launching product in similar category and price tag.

The new Karbonn A25 is powered by dual core processor running at 1Ghz. It has inbuilt 512MB of RAM and 512MB ROM. If you wish to expand its memory, you can use microSD card which is supported by this handset upto 32 GB of external storage. In terms of connectivity, as already mentioned, this handset lacks 3G connectivity however, you have option of 2G and it support EDGE class 12. Other connectivity feature include WIFI with WIFI hotspot support and bluetooth v3. It also comes with A-GPS through google maps.

In the area of photography, it has 5 megapixels primary camera and has secondary ie. front VGA camera. You can find all usual sensors in the phone like Proximity Sensor, Accelerometer, G-Sensor, Light Sensor.

Coming to rather important part ie. Display, it has 5″ inches display with WVGA 480×800 pixel resolution which is decent enough for a budget phone. It sails on Android V4.0 Ice Cream Sandwich.

Last but not least, this phone is also a Dual SIM phone with Dual Standby feature and it has been powered with a 2000mAH battery which should give decent backup considering this phone doesn’t have 3G.