Sony seems to be on a launching spree, one after another, Sony is introducing interesting mobile phones in Indian market. Sony has launched E1 and E1 Dual with pricing of Rs. Rs. 9490 and Rs. 10490 respectively. The E1 is single SIM version while the E1 Dual is dual SIM version. Both variants will be available in white, black and purple colors.

However, their previous launches like Xperia M and Xperia E were not a great success, but its seems learning from the past, they are improving their portfolio with better value for money and more features in sub Rs. 10000 handsets. 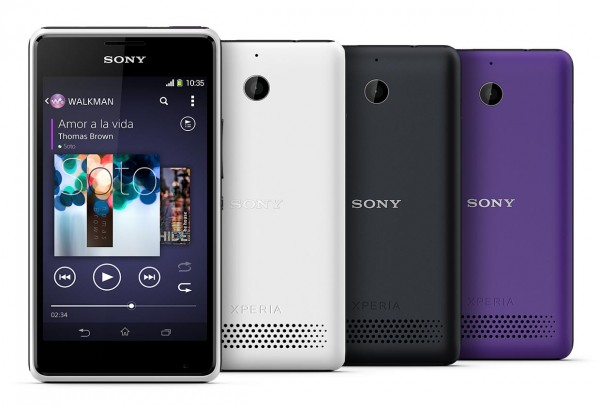 In terms of specifications, both handsets are mid range phone with Sony Xperia E1 featuring a 4″inch diplay with 480×800 WVGA resolution giving 233ppi which is a good considering its price point. The E1 unfortunately does not come with a front camera but there is a rear camera of 3MP resolution that can shoot 720p videos. In terms of dimensions, Sony Xperia E1 is light weight at 120 grams but not that slim, its 12mm thick.

Sony Xperia E1 has a dual core Snapdragon MSM8210 1.2 GHz chipset and Adreno 302 GPU along with 512mb RAM. Also, Xperia E1 has loudspeaker which Sony claims delivers a output of 100 dB which will be enough for casual music listening. And ofcourse, E1 Dual comes with similar specifications but with dual SIM option. It has a 1750 mAh battery 3G, Wi-Fi and bluetooth.