Chinese manufacturer, Gionee mobile has upgrade it’s smartphone portfolio in the indian market. Company has introduced a new addition under it’s existing range of smartphones. The named of this new gigantic device is Gionee CTRL V4 and from it’s launch it automatically line up in the cheapest range of quad core powered smartphone in the indian smartphone industry. 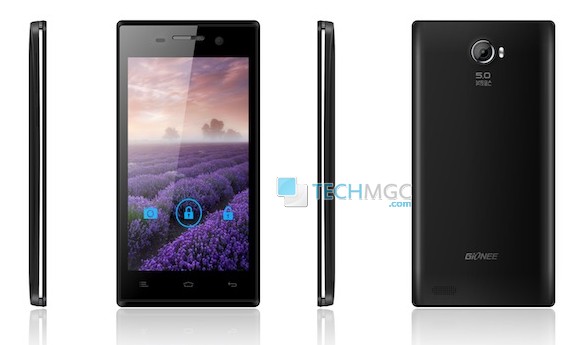 Gionee CTRL V4 is a new successor of company’s already launched CTRL V3 , and as per the name suggest it can be assumed that CTRL V4 will be a slightly moderated version of CTRL V3 in terms of specifications and features. The Smartphone industry has made leaps and bounds of strides in every way, but all of it was reserved for the ones with lots of cash. Now, it looks like a myth as these domestic and chinese manufacturer launched some nice and super gigantic gadgets at an affordable price range. Gionee CTRL V4 is a new entrant in the same line up. Coming towards it’s technical specifications and detail, Gionee CTRL V4 supports dual sim (gsm+gsm) with dual stand by technology.

Specifying it’s display specifications, Gionee CTRL V4 flaunts 4.5 inch of Capacitive touch screen display with 854*480 of FWVGA pixel resolution. Dealing with it’s Platform dependency, this device run on Android 4.2 Jelly Bean operating system powered with a MediaTek Quad core MT6589M processor at a clock speed of 1.2 GHz. Opening it’s graphics unit, it support PowerVR SGX 544 GPU card which makes the graphics looks more viable and sharper. In terms of storage specifications, this device is equipped with 512MB of RAM, 4GB of internal memory which can be easily expanded up to 32GB via micro SD card slot. RAM support is quite low it should be more than what is given with as to make the performance more smoother and faster.

Enumerating it’s photography specifications, this device supports both the primary and secondary camera options. On it’s back side, it supports a primary camera rated at 5 MEGAPIXEL associated with LED flash which enable the user to capture nice photography experience even in the dim light. It also support video recording up to 720p. On it’s front side, it support a 0.3 MEGAPIXEL of secondary camera for video chatting. Briefing it’s Connectivity specifications, this device is enriched with 3G, Wi-Fi (b/g/n), Bluetooth 4.0, FM radio, GPS with A-GPS, Yamaha PA 168, micro USB port and 3.5mm universal audio jack. Sensor: G-Sensor, magnetic, light and proximity sensor.

The price of Gionee CTRL V4 is Rs 9,999 and is powered with 1800 mAh of battery which is disappointing. The phone comes with thousand of pre-installed applications.