Chinese mobile phone manufacturer Gionee has added another phablet in its line-up of smartphones in India. The device is expected to hit Stores in India in first week of this May. Few days ago, Gionee had launched Gionee P1 smartphone and L800 basic phone  in India and now joining the race of affordable quad-core processor powered phones, they have offered their latest product. 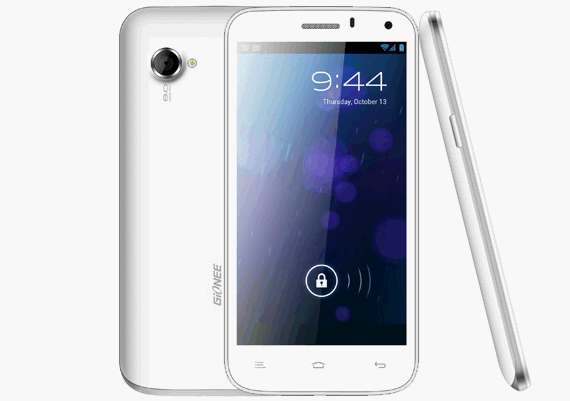 The price and full details are not yet available for this device, however from the sources, Gionee GPad G2 will run on 1.2 Ghz Quad-core Ghz MediaTek MT6589 processor with PowerVR SGX544 GPU. The device will have 1GB of RAM and 16 GB of internal memory and have support for MicroSD card which can be used to expand memory upto 32 GB.

In terms camera, the device will sport a 8 MP auto focus camera with LED flash and will be capable of recording video at 720p at 30fps. It also has 2 mp front facing camera useful for video call. On connectivity front, it support 3G, WIFI b/g/n and also have 4.0v bluetooth with A2DP support. It has inbuilt A-GPS support and has powerful 3000 mAH battery to give you decent power backup on this phone.

Now coming to the visual aesthetics, it has 5.3 inch qHD with a resolution of 960 x 540 pixels which gives 220ppi of resolution approximately.

On software front, this phone will be powered with 4.1.1 Jelly bean Android operating system and will come with standard preloaded apps like Facebook, NQ Security, You Tube, Twitter, You Tube etc.

Also, as introductory offer, company is giving away 16GB memory card with the phone along with a leather flip cover and screen guard.