Acer incorporation, fourth largest pc maker in the world and one of the leading company in gadgets industry has announced it’s new element Acer Iconia A1-810 in the Indian market. Acer’s products include inexpensively-targeted desktop and laptop PCs, tablet computers, servers, storage devices, displays, smartphones and peripherals. Acer is always in the list of top well known brand available in the country. 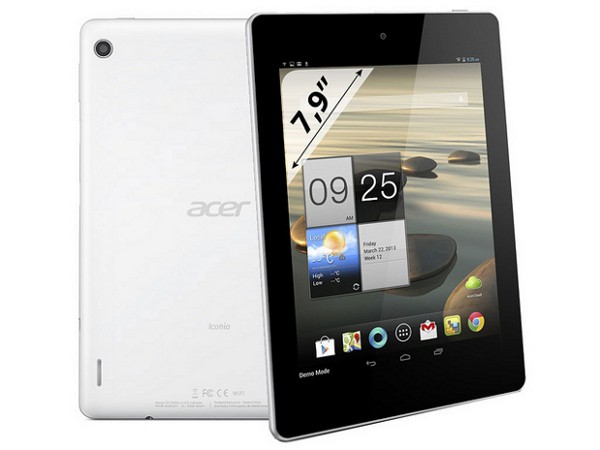 With Acer Iconia A1-810 company is aiming to give a tough fight Apple i-Pad mini. Specifying a quick overall view of it’s technical specifications, Acer Iconia A1-810 will flaunts a 7.9-inch IPS Touch Screen display with 1024 x 768 pixels resolution. Dealing with it’s Platform dependency, the tablet will run on Android 4.2 (Jelly Bean) Operating system out of the box. Acer Iconia A1-810 will reportedly be powered by MediaTek’s quad-core MT8125 processor clocked at 1.2GHz. Briefing it’s Storage specifications, it is expected with 1GB of RAM, 16 GB of internal memory which can be easily expandable up to 32 GB via microSD card slot. Speculating it’s body dimensions and specifications, this device will weigh nearly 430 gms and measures 10.5 mm in overall thickness.

Enumerating it’s connectivity support, it will houses the usual support in terms of connectivity like WiFi, Bluetooth, USB and many more. Eying on towards it’s Image Optics, this device is expected to be offered with both the cameras, on the back it will be spotted with a primary camera rated at 5MEGAPIXEL with autofocus technology and to make the user enjoy the full fun of video calling it also houses a secondary camera rated at VGA. Some of the other pre-loaded applications include google maps, gmail, youtube, facebook and many more.

To make the life going on for this device, Acer has dubbed this device with 3250 mAh of battery. The device has yet to be announced officially by the company but is down for a June release, and is expected to be priced nearby RS. 12000 as per insiders and resources.

Acer said in January it would recognise a total of TUSD3.5 billion impairment for trademark rights on its four brands, including Gateway, Packard Bell, eMachines and E-Ten. For the full year 2012, the company recorded a net loss of TUSD2.91 billion, narrowing from a net loss of TUSD6.6 billion in 2011. It hopes that we launches such new product , it will be able to get company in profitable state again.