Counted as one of the leading innovator worldwide South Korean manufacturer, “Samsung Mobiles” has silently dipped a new element in the arena of Smartphones especially destined for Straight Talk. The name of this device is Samsung, “Galaxy Centura” which will be a bar-style phone. However, this device wasn’t announced officially by the company but a list of it’s specifications are available online on their official website. 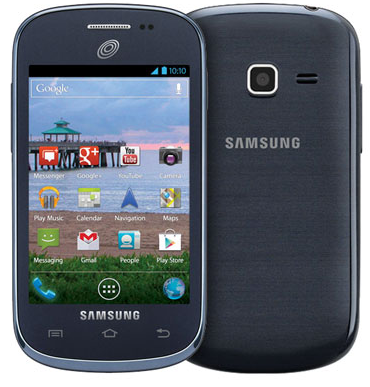 Samsung Galaxy Centura will be a new smartphone announced under company’s most famous range of Smartphone series known as the, “Galaxy series”. Shifting the concentration towards it’s specifications, this device will sports 3 inch of Capacitive Touch Screen display with 320 x 480 of pixels resolution. Dealing with it’s Platform dependency, this device will sails on Android 4.0 Ice Cream Sandwich Operating system powered with a Qualcomm MSM7625A processor with a clock speed of 800MHz. Reading it’s Software and display specifications, it can be visualize as a new entry by Samsung under Galaxy series in a budget and price-conscious segment. In terms of Storage specifications, Samsung Galaxy Centura is equipped with 4GB of Internal memory, 512MB of RAM which can be easily expandable up to 32 GB via microSD card slot. Enumerating it’s Photography specifications, Samsung Galaxy Centura is equipped with a primary camera rated at 3.0 MEGAPIXEL with Digital optical zoom up to 3X.

To run this device, this device is equipped with 1500 mAh of battery which will deliver 7 hours of talktime and 10 days of stand by time as claimed by the company. Some of the other features include: Corporate Email, Picture Messaging, Text Messaging, Instant Messaging, Video Messaging, Predictive Text.

There is not much information has been made available by the company regarding it’s pricing and availability yet.

For more information, keep updated with us.