ZTE Mobiles, is a sub division of ZTE Corporation. ZTE Corporation is one of the leading company in telecommunications equipment, networks and mobile devices globally headquartered in Shenzhen, China. ZTE Mobiles has announced a new entrant named, “ZTE Grand X2” successor of the Grand X IN which was unveiled last year. 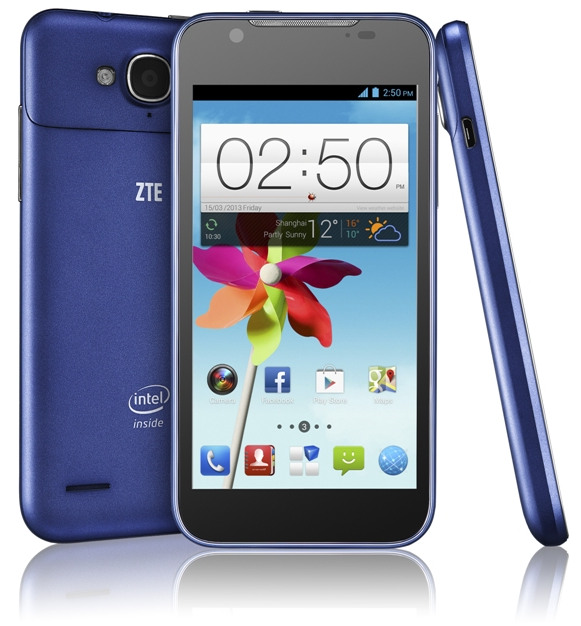 As per the global industry analyst IDC report, ZTE is the No. 4 mobile handset manufacturer in the world. As company produces a wide range of devices including mobile phones, tablets, mobile broadband modems and hotspots and family desktop integration terminals. To expand it’s mobile phone ranges, company has announced a new player in the Smartphone industry under it’s prodigious Grand series of smartphones named ZTE Grand X2 . Giving a glance towards it’s technical details and specifications, ZTE Grand X2 will flaunts a decent 4.5-inch of HD, IPS, Capacitive touch screen display with 1280 x 720 pixels resolution. Information regarding it’s Platform dependency is remained undisclosed though as per our speculation it will run on Android Jelly Bean Operating System.

In terms of hardware, ZTE Grand X2 will be powered with Intel Atom Z2580 Clover Trail+ processor running at a clock speed of 2Ghz. It will also supports hyper-threading. Hyper threading or HT is Intel’s proprietary simultaneous multithreading (SMT) implementation used to improve parallelization of computations (doing multiple tasks at once) performed on PC microprocessors.

“We are excited to extend our collaboration with ZTE on their latest innovative platform, the new Grand X2 In,” said Helmut Vogler, Vice President and General Manager of Mobile and Wireless Sales at Intel. “Our teams have worked together to harness the power of the Intel® Atom™ processor Z2580 to create a high performance smartphone with market-leading features and long battery life. The Grand X2 In will provide an excellent choice for consumers in fast growing smartphone market.

In terms of Photography Specifications, this device will support both the primary and secondary cameras. On it’s back, it is equipped with a primary camera rated at 8 MEGAPIXEL with LED flash technology. LED flash technology helps the user to click nice pictures even in the low vision. On it’s front, it will houses a front facing camera rated at 1 MEGAPIXEL for video calling. It also support 1080p of Full HD video recording. Briefing it’s Storage support, ZTE Grand X2 will be equipped with 1GB of RAM, 8GB of Internal memory which can be easily expandable up to 32 GB via micro SD card slot.

“We are proud to announce the ZTE Grand X2 In smartphone pursuing our multi-year strategic collaboration with Intel,” said William Chhao, Terminal Director at ZTE France. “The ZTE Grand X2 In is set to build on the success of the ZTE Grand X In, our first flagship smartphone in Europe to feature Intel Inside, and further increase ZTE’s growth in the high-performance smartphone market segment.”

To power it up, this device is equipped with 2000 mAh of battery. ZTE Grand X2 would be available in Europe in Q3 2013 from key operators and channel partners. Information regarding it’s launch and availability in India is yet to be disclosed.