Chinese manufacturer, Zopo mobiles has launched a new entrant named as Zopo C3 in the Indian market. This mobile handset is launched especially to target the women buyers and you guessed it right, the phone has been launched in the most preferred feminine color, ie. pink. Zopo C3 will be the successor for company previously launched handset Zopo C2 smartphone with some feature enhancements. 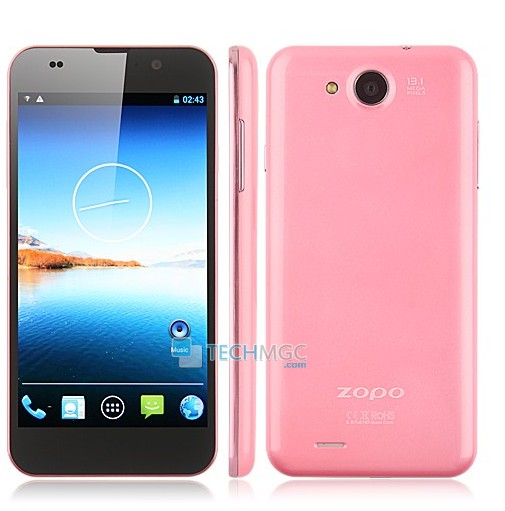 Zopo is suffering to have reputable status in the gadget industry because of it’s delays in delivery, cancellation of orders, now from the launch of Zopo C3 company is aiming to improve it’s market reliability. Coming towards the launch of the day and specifying it’s technical details and specifications, Zopo C3 supports dual sim (GSM+WCDMA) with dual standby technology. In terms of frame up, this device flaunts an huge 5 inch of LTPS TFT Capacitive Touch screen display with 1080×1920 of pixels resolution. Other entities up front are 3 capacitive touch buttons for navigation. LTPS stands for Low Temperature Poly Silicon- thin film transistor. A thin-film transistor (TFT) is a special kind of field-effect transistor made by depositing thin films of an active semiconductor layer as well as the dielectric layer and metallic contacts over a supporting (but non-conducting) substrate.

Dealing with it’s Platform dependency, this device sails on Android 4.2 Jelly Bean operating system which is the latest bug free operating system by Google. It is powered with a MediaTek MTK6589T quad core processor at a clocked at speed of 1GHz. To enhance the gaming and graphics section for this device, company has equipped it with PowerVRSGX 544 GPU chipset support. In terms of storage specifications, this device is equipped with 1GB of RAM, 16GB of Internal memory. In order to expand the internal memory further, this device comes with an memory expansion slot called as microSD card slot. Briefing it’s Photography specifications, this device has been offered with both the primary and secondary snapper options. On it’s back, it include a primary camera rated 13 MEGAPIXEL camera and on it’s front it include a secondary snapper rated at 2MEGAPXIEL. Some of the other features of camera includes Autofocus and LED flash technology.

In terms of power capacity, this device draws power from 2000mAh of Li-po battery with 200 hours of standby time. The Price of Zopo c3 is Rs 17,500 with 600 shipping charges.