Bowing the arrow with two new entrant at the biggest volume of budgeted Smartphone market, “Karbonn Mobiles” has launched it’s two new successor as Karbonn A3 and A6 in the Indian market. Both Karbonn A3 and A6 are entry level Smartphones packed up with descent specifications. 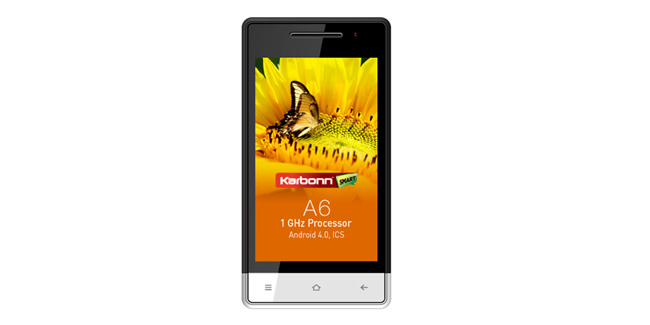 Karbonn Mobiles were out from the race course for a quite while under the most heaviest volume up series of budgeted Smartphone. However, now with Karbonn A3 and A6 it looks like company is strongly aiming to be counted amongst the leading successor in the entry level segment of smartphones. Diversifying the interest towards Specifications, coming to Karbonn A6 display specification, it features 4.0-inch capacitive touch screen IPS display with 480 x 800 pixels resolutions. The Device support Dual Sim ( GSM+GSM ) connectivity with Dual Standby, common feature incorporated by most of the domestic manufacturer in their devices. Under the hood, it sails on Android 4.0 Ice Cream Sandwich Operating System powered with a a Single Core Processor clocked at 1 GHz. Briefing it’s Camera Unit, Karbonn A6 support 5 MEGAPIXEL of autofocus rear camera with LED flash and a secondary camera for video calling rated at VGA. Enumerating it’s Storage hub, it supports 512 MB RAM, 104 MB of Internal memory which can be expanded up to 32 GB via MicroSD card slot.

In terms of Connectivity, Karbonn A6 supports 2G EDGE/GPRS, Wi-Fi 802.11 b/g/n,Bluetooth, micro USB, 3.5 mm Audio Jack with FM Radio technology. However, the device lacks 3G support. To power it up, it has been equipped with 1450 mAh of battery. Some of the pre-loaded applications include Google Play, Google Search, Gmail, Google Talk, Play Store, News, Weather.

The price of Karbonn A6 is Rs 5,390 and is available for sale on all the leading online retailers across the country.

Quick View of Karbonn A6 Specifications:

Concentrating towarsds specifications of other launch ie. Karbonn A3, it’s a 3.5 inch capacitive screen HVGA display with 480×320 pixels resolution. It also supports Dual Sim with Dual Standby technology. Dealing with the device Platform dependency, it runs on Android 2.3.6 Gingerbread Operating System powered with a Single Core Processor clocked at 1 GHz. In terms of Photography, Karbonn A3 support 3MEGAPIXEL of primary camera with fixed focus technology and a front camera rated at VGA. Briefing it’s Connectivity Specifications, it supports 2G (GPRS / EDGE), Wi-Fi, Bluetooth, FM radio, 3.5mm jack and micro USB and also lacks 3G support. Opening the Storage unit, Karbonn A3 has 256 MB RAM, 155 MB of internal memory which can be expanded up to 32 GB via micro SD card slot. To Power it up, it is equipped with 1400 mAH of battery with 4 hours of talktime.

The Price of Karbonn A3 is Rs 3,600 and is available for sale across the online retailers across the country. 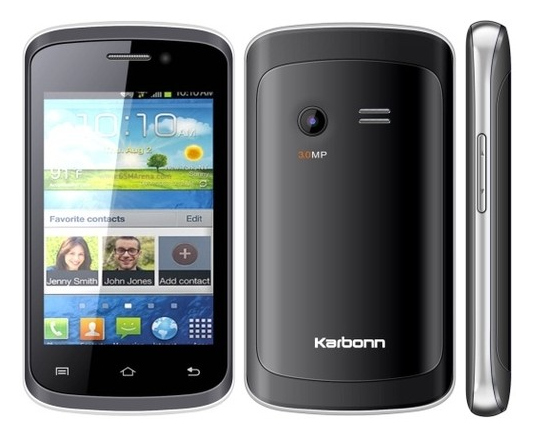 Quick View of Karbonn A3 specifications: