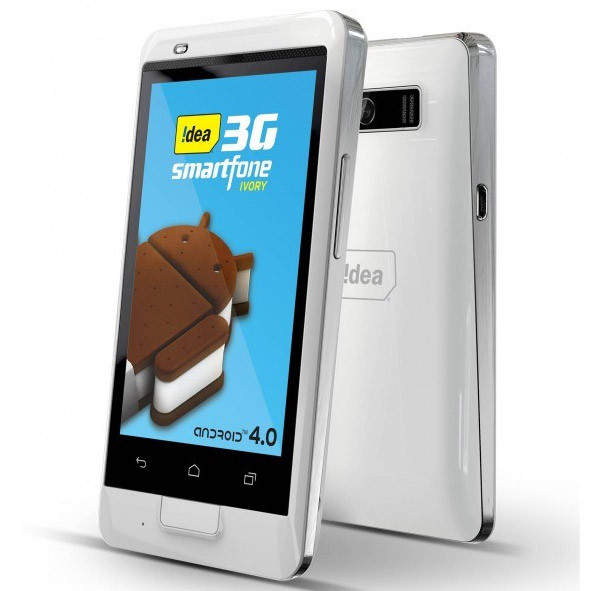 Idea Ivory feature with 3.5 inch full touch display with 480 x 800 pixel resolution (which is quite practical and comfortable in hands unlike other device offered with huge screen size) and to blow the display with vibrant color pattern it is packed up with 262K colors. This device supports a Dual-Sim (GSM + GSM) technology and runs on Android 2.3.6 gingerbread Operating System ( it’s surprising to see Idea launched this device with an older version of Android while almost all latest phone and devices are being shipped atleast with Android 4.0 versions) powered with a processor clocked at 800 MHz. Enumerating towards the Photography, this device dubbed with 2 MEGAPIXEL of rear camera and lacks secondary camera. Dealing with it’s Storage Specificatins, it comes with 4 GB of internal memory which can be easily extendable upto 32 GB via micro SD slot. Briefing about it’s Connectivity, Idea Ivory supports 3G and WiFi, GPS, G-Sensor, Bluetooth, SNS ready, micro USB and 3.5 mm jack.

Speaking on the occasion, Rajat Mukarji, Chief Corporate Affairs Officer, Idea Cellular said, “Devices play an important role in enhancing service experience for the user, and has been a key component of Idea’s 3G growth strategy. Idea Ivory, based on the latest Android 4.0 OS, and all other previous 3G smartphones, have been affordably priced to propagate data usage amongst mass consumers. Idea’s continuous focus on enhancing consumer experience, and understanding and providing support to user(s) needs and requirements in the relatively new and emerging service area such as 3G, has enabled us to become the most associated brand with 3G and data.”

Like all the other previous smartphones from Idea, the Ivory also comes with the operator’s data usage offer for Idea 3G users. The company is offering 1GB of free data every month for the first 3 months and free Idea TV for just Rs. 261. The price of Idea Ivory is Rs 7,390. It will be interesting how techfolk will show their interest in this Smartphone as there are many options available in the market giving a tough competition.