Micromax, domestic manufacturer has launched a new entrant in the foray of budget android smartphone’s segment as,”Micromax A30″ in the Indian market. It looks like company aiming to capture all avenues of budget smartphones yet with premium features. 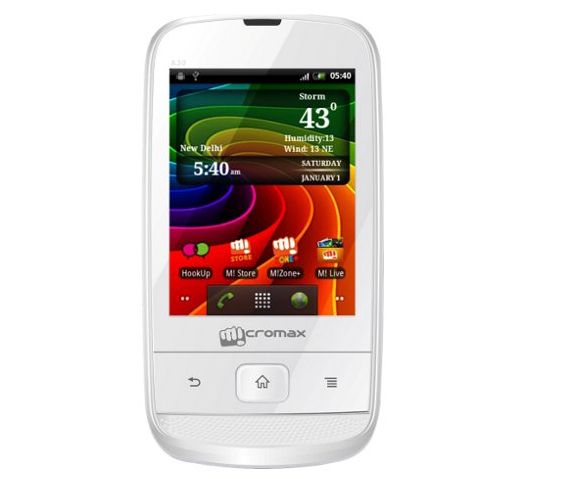 Outlining it’s frame up, Micromax A30 featured with 3.0 inch capacitive touch screen display with 240 x 320 of pixels resolution. To Illuminate it’s display with vibrant colors this device is packed up with 256K colors. Dealing with it’s Platform dependency, Micromax A30 will runs on Android 2.3 Gingerbread Operating System ( it seems to be a basic device running on an outdated hardware and software) powered with a Single Core processor of Broadcomm clocked at 832 MHz. Micromax, continues it’s legacy by introducing Dual SIM (GSM + GSM) with Dual Standby technology which can be spotted in most of it’s Smartphone under low budget. In terms of Storage Specifications, Micromax A 30 dubbed with 256 MB RAM with 512 MB of internal memory which can be easily extended up to 32 GB via micro SD card slot (512MB internal storage appears to be rather low as internal storage even though it can be expanded through 32GB micro sd card but no offense considering its a very entry level smartphone and at very low price).

Enumerating it’s Connectivity features, Micromax A30 will supports 3G (HSDPA 7.2 Mbps), Bluetooth 2.0, Wi-Fi 802.11 b/g/n, GPS, Micro USB, 3.5mm audio jack, FM Radio with recording. Viewing it’s Power, this device dubbed with 1500 mAh of battery which claims to deliver 4-5 hours of talktime. In terms of Image Optics, this device offered with a 2 MEGAPIXEL of primary camera with LED flash and does not come with secondary camera.

Earlier, we have seen Micromax launched A25 as a budget Android Smartphone which lacks 3G, however this device support 3G and it looks like value for money. The price of Micromax A30 is Rs 3,849.

If anyone looking a low budgeted Smartphone and want to enjoy the experience of Android with 3G then Micromax A30 dubbed with all the features your looking for. Please leave comments below about your view for this offering from MMX.