Nokia is betting hard on low light imaging in their smartphones, we have seen PureView technology claims from Nokia being one of the best phone to capture images in dark. And from latest rumor which is confirmed to be Nokia’s upcoming Lumia 928, also rides on low light imaging as its one of the strong feature. As per reports and image posted by a mynokiablog, someone already set up Nokia Lumia 928 billboard before actual launch. 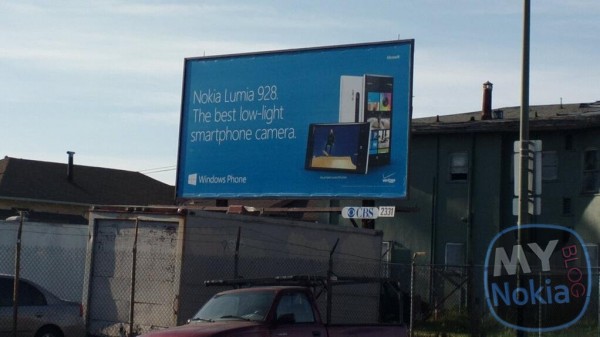 As per the image, it is claimed that Nokia Lumia 928 is going to be best low light smartphone camera. Seems to be big claim but does it really sell your phone? I think yes, I have seen some costly phones being disappointing in terms of low light imaging and now whenever I go for smartphone shopping, one of my main concern is low light photographic capability of the smartphone because I don’t want to loose any precious moment to be captured just because of my crappy smaprtphone camera, and you all know carrying a phone is easy rather than full fledged digital camera with you all around.

The new Nokia 928 is about to be announced soon this may itself but there is no concrete / official information about it. But with this bill-board image, its clear its coming very soon and its pre-launch preparation. However, we can’t deny the fact that picture can be unreal but from what we see, it looks real and true. It is reported to have a Xenon flash and definitely nokia’s pureview technology. The phone is expected to first launch by Verizon as we can see Vrizon logo in picture. For worldwide launch, we may have to wait for Nokia’s official announcement.

Lately we are seeing lots of powerful and premium phones from big brands and now it seems to be turn of Nokia with their new Lumia 928. It will be exciting to see how well they fare with their new new element in comparison to recent high end launches like Samsung Galaxy S4 and HTC One.