Today, XOLO is hot in news with nnother entrant spotted online from the same “Q” series which is already in news because recent leaks and launches from XOLO. The new device “Xolo Q600” which was spotted online on the Nenamark Benchmark site. Result shows Xolo Q600 got a score of 47 fps as per nenamark2.

Back to Back leaked images and specifications of three handset, it appears company is strongly aiming to bring a huge storm in the smartphone segment worldwide. 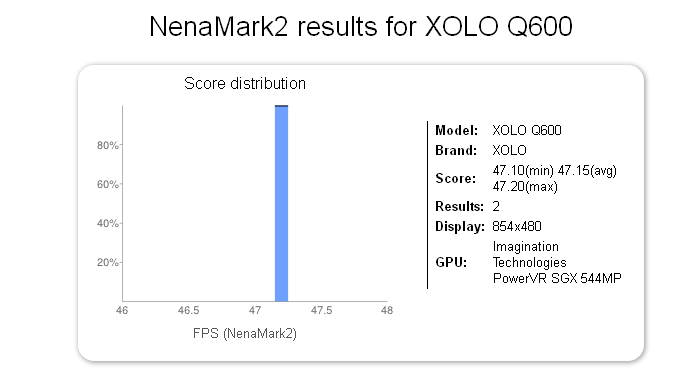 Not much information is yet available though as per the image found we are able to specify some of it’s specifications. In terms of frame up, screen size was not shown but the screen resolution was showcased at 854×480 pixels resolution, which as per our knowledge would fall within 4-4.5 inches of screen size ( it is a speculated screen size). Dealing with it’s Platform dependency, the device will sails on Android 4.2.1 Jelly Bean Operating System powered with a Quad Core processor clocked at 1.2GHz. To make this device a nice player in terms of gaming it is dubbed with PowerVR SGX 544MP GPU. However, it somehow packed up with the same hardware specifications as we saw in recent launches and leaks from Xolo except XOLO Play T1000.

However, from it’s name Xolo Q600 it can be speculated that it will come with a slight limited features and technical specifications as compared to recent launches by Xolo like Xolo Q700 etc. Essentially company is planning to launch lots of variant to capture various niches of market from Power user to an average user.

It’s nice to see such handsets at distinct price levels which make the user to choose it’s favourite device.