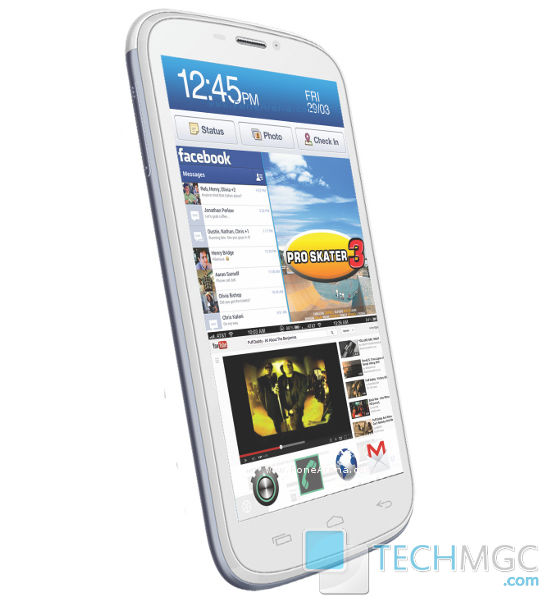 Celkon has launched their 1.2 GHz quad core CPU, MediaTek MT6589 SoC powered smartphone A119Q which is actually their first smartphone with quad-core processor. The phone boasts 5″ 720p IPS LCD capacitive touchscreen display. Other prominent feature of device include Dual SIM feature (GSM+WCDMA), which means you can use 3G service on either of the SIM but not on both at same time. In the area of connectivity, this device has HSPA+ , Class 12 EDGE and GPRS support along with WIFI with Hotspot and Bluetooth v4.0 support. It also has micro-usb port. For the need of navigation, it is equipped with A-GPS support via google map.

Coming to its graphic capabilities, it is equipped with SGX544 GPU and for RAM, is boasts 1GB of decent RAM and for internal storage, it has 4 GB ROM and 2.5GB of user available space. You can also increase its internal storage through microSD card upto 32GB. Talking about its software compatibility, phablet comes preloaded with Android. 4.2.1 Jellybeans operating system few other standard apps like Youtube, Facebook, Google play store. However, nevertheless to say, you can always download apps of your choice from Google Play store, there are many thousands of them to choose from.

Moving towards its optical capabilities, the phone is loaded with 12MP rear camera with LED flash and autofocus feature however, you can’t expect a lot with this camera in low light photo shooting. This phablet is a sleek phablet which measures 9.3 mm in thickness.

To power our new phablet, it is equipped with 2100mAh of battery which provides an acceptable talktime and standby time however exact details are yet to be revealed by the company.

The phone is priced at Rs. 12,499 and expected to compete with other rival like Micromax Canvas HD, Zen Ultraphone 701 HD and XOLO Q700 however, among all these, it has highest rated camera and it seems to be priced right too.