Spice, domestic manufacturer and service provider has launched a new Smartphone under it’s prodigious series MI as,”Spice Mi-352″. Spice has been quiet for while in Smartphone segment and with the launch of Mi-352 it seems they too want to take front seat in the competition. 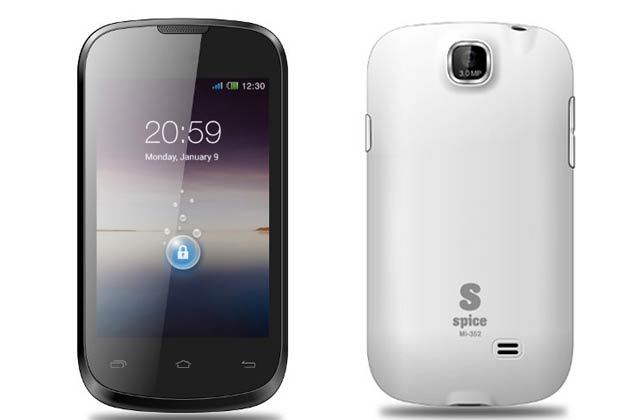 Specifying it’s frame up, Spice Mi-352 will feature with 3.5 inch TFT LCD capacitive touchscreen display with 480×320 pixels resolution. It also offered with 262K colors to blow the display. This Device will run on Android 2.3 Gingerbread Operating System (it’s strange to see Spice Mi-352 with such an outdated version, since most of the device offered with Android latest versions). In terms of power specifications, it has been dubbed with a Single Core Qualcomm processor clocked at 1 GHz with Adreno 200 GPU and 256 MB of RAM. Following the same orientation inherited by most of the biggest Smartphone’s maker in the country, this device comes with Dual SIM with Dual Standby technology. Enumerating device Connectivity specifications, Spice Mi-352 will support 3G, WiFi, GPS and Bluetooth. It is quite strange to see 3G dubbed device under such a price tag despite of micromax A30 which was also spotted recently. In terms of Photography, this device support a 3 MEGAPIXEL rear camera with CMOS sensor and video recording somehow lack with a secondary camera.

Spice Mi-352 support 512 MB of internal memory which can be easily expanded up to 16 GB via micro SD card slot. The phone also offered with two colors- White and Black. The price of Spice Mi-352 is Rs 4,634 and it is made available at all online retailers across the country. To Power it up, this device is dubbed with 1300 mAh of battery which claims to deliver 3-4 hours of talk-time.

Spice Mi-352 is a nice element to buy at such a price tag offered with 3G. It will attract interest of most of the tech-folks planning to go for a 3G handset at low price tag.