Day by day, the graph of evolution in terms of introducing new technology for smartphones, tablets and other gadgets is rising worldwide. Hardware wise, in terms of processors some of the reputed companies like Intel, AMD and Mediatek has gained a lot of popularity by delivering their products with best innovations. And to remain the part of this evolution with a wish to lead it, MediaTeka semiconductor company for wireless communications and digital multimedia solutions has officially announced the world first true octa core processor.

We all know that Samsung had already announced the Samsung Exynos 5 octa-core processor but this processor is very much different in terms of working when compare with MediaTek true octa core processor. Now, recalling the specifications of Samsung Exynos 5 Octa Core chip , it activates only one group of four cores at a single instant of time time. With the new processor introduced by MediaTek , all eight cores are active at the same time, leading to smoother game playing, web browsing, improved video playback, and improved battery consumption.

MediaTek says, “that all 8 cores can be used without overheating”. MediTek Octa Core True processor allocates processing power to different cores on per-application and per-task basis that gives the ultimate multi-tasking experience. The newest addition to the MediaTek SoCs comes with advanced web browsing feature that has the unique ability to allocate individual browser tabs to CPU cores. 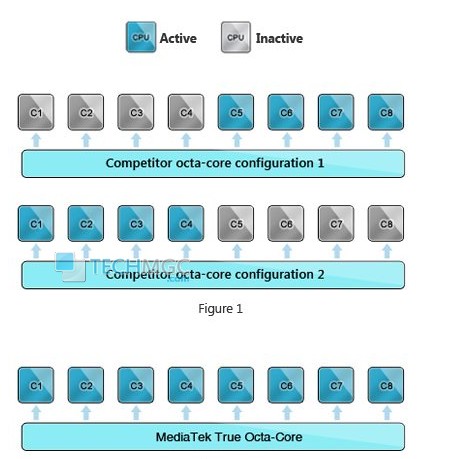 MediaTek processors are generally used by global smartphone vendors which provide smartphone in low cost segment, MediaTek is more popular in supplying processors to the low-end Android smartphone manufacturers. Thus to improve it’s market value it is very important the company get in talks with other manufacturers to use this true-octa core chips in their high-end devices before other companies such as Samsung or Qualcomm launches a similar product.

I think this news will create a storm among the low cost gadget lovers. Chances are that soon various entry level manufactures will come up with Octa-Core handsets as we are seeing currently with quad core devices. You can now buy quad core devices in sub Rs. 10,000 budget, and with new MediaTek OctaCore SOC, soon you may grab an OctaCore handset in similar prices. Are you waiting for OctaCore from MediaTek, do you think it can create any noticeable difference in a normal user experience, please share your view with us.