HTC has just made the official announcement about their Dual SIM HTC Desire 600 which is supposed to be bringing HTC’s premium phone features in more affordable series. If you know, sense 5 which includes BlinkFeed screen that is something quite useful if you are active on social networking sites as it brings latest updates and feeds from almost all social networking sites and many hundreds of media sources. The sense 5 was from regime of high end HTC devices like HTC One but with the launch of HTC 600 Dual SIM, you can now experience it at a moderate price. 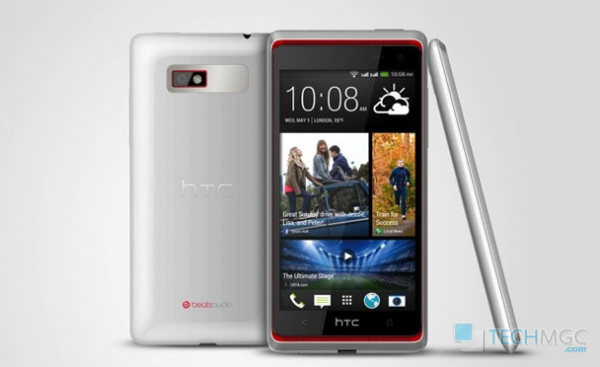 The Desire 600 also features BoomSound and the ability to craft video highlights from your photos and clips also make the transition. The new HTC Desire 600 has got some serious hardware under the hood, the device is powered with quad core Cortex A5 CPU running at a clock speed of 1.2 GHz. In terms of memory, it is adequately supported by 1GB of RAM along with 8GB of internal memory. The device runs on Snapdragon 200 chipset and has Adreno 203 as Graphic processing Unit.

On the display front, it has been packed with 4.5″ of Super LCD2 screen with qHD (960 x 540) resolution giving you around 244ppi of pixel density. On the optical arena, this device has been provided with 8MP of primary camera which is capable to shoot video at 720p and 1.6MP of front-facing camera that can capture videos, snaps and yes can be used for video calling.

The main highlight of the phone is its dual SIM support, the phone has dual sim active support, it means you can receive call on both SIM at same time even if the one of the SIM is busy. Phone’s connectivity feature includes 3G with HSDPA (up to 7.2Mbps), has bluetooth 4.0 support with aptX. As generally found in all modern devices, this one also gives you ability to use WIFI b/g/n. Has inbuilt NFC and GPS support with GLONASS.

Also, other prominent feature as mentioned already its HTC BoomSound which with the hlep of the dual front-facing speakers of the HTC Desire 600 give you nice experience with exclusive built-in amplifiers, whether you’re listening to music, watching movies or playing games, the speakers, which minimise distortion, offer a sharper, richer, wholly immersive smartphone sound. Beats Audio™ integration also takes the audio quality to the next level guaranteeing an experience as intense and high-powered as the device itself.

There is not much information given about the price of HTC Desire 600 dual sim, regarding launch date, company mentioned that device will be available from June2013 across the globe.