Just after the official announcement of HTC Desire 600 dual sim, HTC Desire 608t has been spotted on Chinese HTC shopping site. The new HTC 608t is nothing but a new version of HTC Desire 600 which launched yesterday but with support for TD-SCDMA network specially meant for China. 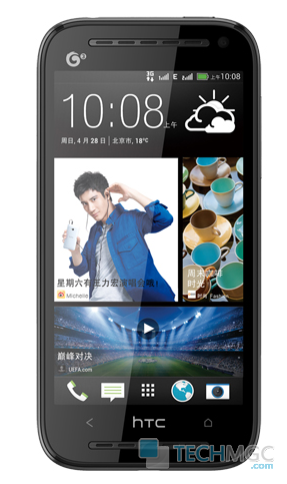 It has all those feature which we saw in HTC Desire 600 dual sim yesterday including Dual SIM dual active technology support which is main highlight of this phone. Like HTC Desire 600, this one also comes with 4.5 inches of Super LCD 2 with a qHD resolution of 960x540px. It has 1GB of RAM and is bundled with inbuilt storage of 8GB which can be expanded upto 64 GB via microSD card.

Other important feature, which is again similar to HTC Desire 600 is inclusion of BoomSound which with the help of two front facing speakers creates impressive sound experience. It is also preloaded with HTC Zoe and HTC BlinkFeed.

This device runs on Android 4.1 operating system and comes with the proprietary Sense 5.0 UI which allows to you receive social updates from many hundreds of resources easily on your device. On the connectivity front, it has 3G support, Blutooth v4.0, DLNA, Wifi b/g/n and NFC support.

In terms of it dimension it measure roughly 135.75x67x9.84mm and weighs nearly 130gram. Coming to its power specifications, HTC Desire 608t has been powered with quad core snapdragon cpu running at 1.2 Ghz of clock speed.

Moving towards its optical capabilities, it has a powerful 8MP front camera which is able to record 720p videos at 30fps and has a 1.6MP front facing camera for your video calls, video chat etc. And to give life to all above powerful hardware and features, this phone has been equipped with 1860mAh of battery. However, its battery backup, talktime has not been conveyed yet.

As you see, its essentially Desire 600 with support for TD-SCDMA network which is widely used in China. Other than that we were not able to spot any major difference, you may check their chinese sales site for more details.

As per reports, it has been priced at CN¥2,499 (which makes around US $408), it means this phone falls in mid to high range of phone segment.