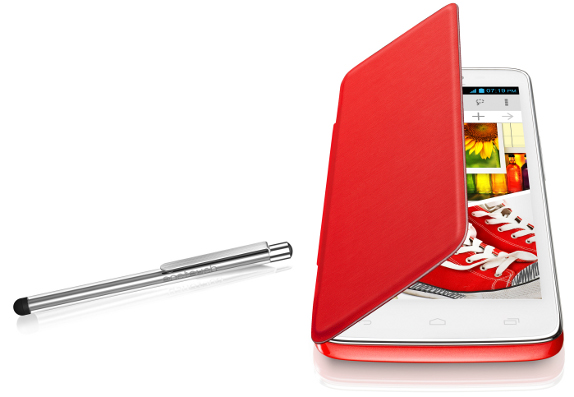 Though it is their latest offering in India, the device is moderately powered if compared to other players in the market. We are now seeing mostly quad – core phablets and phones being launched but this one is powered with Dual Core 1.2 Ghz Snapdragon processor running on MSM8225 chipset. It is equipped with 512MB of RAM and has 4GB of internal memory out of which 2.4GB is available to end user. You can always bump up memory using Micro SD card upto 32 GB.

Coming to its optical specifications, this device has a 5 megapixel primary camera which supports Auto focus, Geo-tagging, face and smile detection, image stabilization, red eye reduction and noticeably the 3D sweep panorama. There is also a secondary front camera rated at 0.3 MP for video call. The device can capture videos at 720p @ 30 fps and is capable of streaming videos.

The device is loaded with Android 4.1.2 (Jelly beans) operating system and comes preloaded with usual application like Youtube, Google Play Store, Gmail etc. On power storage side, it has 2500mAH of battery whereas on connectivity front, it support HSPA : 7.2M downlink 5.76M uplink and Wi-Fi 802.11b/g/n with Wi-Fi direct feature. It has bluetooth v4.0 with A2DP support and also has A-GPS capabilities.

In the area of display, this device has 5″ inch screen with 480×800 pixel resolution capable of displaying 16M colors. In terms screen size, this is Alcatel’s biggest Android mobile, however resolution is mediocre.

One of the prominent feature of the device is its magnetic flip cover termed as MagicFlip and also there is a dedicated touch pen input.

This device was shown officially at the MWC 2013 show in Barcelona earlier this year so apparently it made way to India quickly. It is now available to purchase online at Snapdeal with tag price of Indian Rs. 12090. Stay tuned with us for details and updates.