Domestic manufacturer, Karbonn mobiles has launched a new element named as Karbonn A26 to upgrade it’s smartphone portfolio in the Indian market. This new element joins the elite club of big screen smartphones manufactured by native makers in the gadget industry of India. The price of Karbonn Smart A26 is Rs 6,290 and is packed with nice features and specifications. To make the offer more exciting, one of the famous online retailer across the nation known as flipkart is offering this device with a cash return of Rs 314 which eventually makes it priced under Rs. 6000. 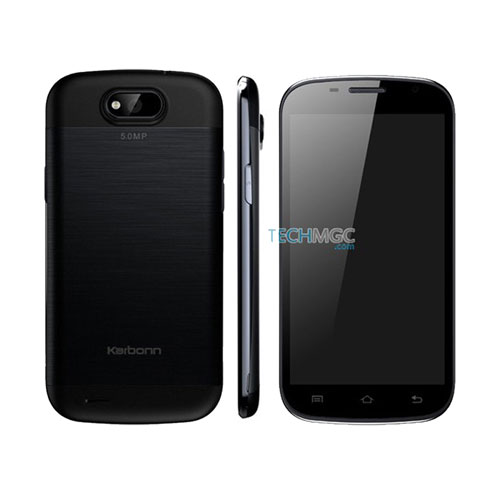 Karbonn mobiles provides a wide range of consumer good and always seems to ensure the best value of money for their customers. And now to continue this legacy more further, company has introduced Karbonn Smart A26 which ensures the value for money of the buyer. Coming towards the specifications and details of Karbonn Smart A26, in terms of frame up this device sports a huge 5 inch of capacitive touch screen display with 854×480 of pixels resolution. This big screen will enable the user to experience the brilliance of life in 16 Million colour output is designed to bring the best of the Android eco-system onto your fingertips. Dealing with platform dependency, this device sails on Android 4.1 jelly bean operating system powered with a dual core processor running at a clock speed of 1GHz. However, there was no detail mentioned regarding the chipset used for this smartphone.

Storage wise this device is equipped with 512MB of RAM, 4GB of internal memory which can be expanded up to 32GB via micro SD card slot. From the memory capability, it looks a nice device which will be capable of storing lots of your document and media files. To enable the user for capturing their life time memorable moment in this device, it comes with both the primary and secondary snapper options. On the back side, it has 5 MEGAPIXEL rated camera with LED flash ensure the user to capture nice quality snapshots in any lightening conditions. On the front side, a VGA(0.3 MEGAPIXEL) rated camera has been associated to make video calls, chats.

Karbonn Smart A26 comes with the facility of using two SIM cards in a single handed device familiar to us as Dual SIM (GSM+GSM) with dual standby technology. Connectivity wise this device lacks support for 3G but supports all other the basic connectivity options which includes 2G (EDGE / GPRS), Wi-Fi (b/g/n), Bluetooth with A2DP, Audio jack, FM radio and micro USB port, proximity, G-sensor and light sensors can be found in it.

Some of the pre-installed applications includes facebook, gmail, youtube etc and to keep you connected towards this social media through out the day this device draws power from 2000 mAh of battery which claims to deliver a nice overall talktime as well as standby time.

As per it’s pricing I think except big screen it houses almost the same and basic specifications which lava, xolo are offering in their device already at similar or lower price range.Though a dual core phone with 5″ screen at such price is a treat, we just miss 3G in this device.