According to Global Handset Market share report from Strategy Analytics, Micromax is now rank 12th among all the leading manufacturer’s serving in smartphone industry across the globe. Achieving a huge success in such a less period of time is quite commendable and appreciable. Continuing the same trend further, company has launched a new element under it’s most prodigious ranges of Smartphones series familiar as, “Canvas” in the country. This new entrant of the company is named as, “Micromax Canvas A111 Doodle”. This device will be a new successor of micromax A110 which gained a lot of popularity in the Smartphones segment. 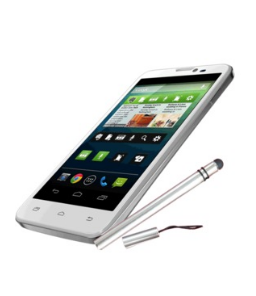 In the past, this phone was consistently in rumours from quite a while but now all those remours come to an end as this device is now available for sale on Snapdeal at a price tag of Rs 12,999. Lifting the curtains up from it’s specifications, Micromax A111 flaunts a 5.3 inch of Capacitive touch screen display with 960x540p pixel resolutions parking it in phablet segment. To add more glitter in the display, this device also supports 5-point multi-touch screen and Glove touch enabled feature which will surely add stars in the display and enhance the smooth gaming experience on this device. Dealing with it’s Platform dependency, this device sails on Android 4.1.2 Jelly Bean operating system powered with a quad core processor at a clock speed of 1.2GHz with Qualcomm MSM8225Q chipset. The same technology which most of the companies incorporates in their devices, this device also uses the same Dual Sim with Dual Standby technology.

In terms of Storage specifications, Micromax A111 is equipped with 512MB of RAM, 4GB of Internal memory. In case if the user is willing to exten the memory storage of this device, company has installed a micro SD card slot in this device through which memory can be easily expanded up to 32GB. It is quite weird to see this device with only 512MB of RAM support whereas other handset in this price range are coming with atleast 1GB of RAM. In the area Imaging Optics, this device is offered with both the primary and secondary camera. On it’s back it is equipped with 8MEGAPIXEL of primary camera with LED flash technology which enable the user to capture nice picture even at a low vision. On it’s front, it is offered with a front facing camera rated at 1.2 MEGAPIXEL for video chatting.

In terms of Connectivity specifications, it comes with all the usual connectivity options which can be easily traced in any device available under the same price tag. It includes 3G, 2G, Wi-Fi (b/g/n), Bluetooth 2.1, micro USB 2.0, 3.5mm audio jack, GPS, Light, G-Sensor and proximity sensors. Some of the other pre-installed applications include Google Search, Gmail, YouTube, Calendar, Google Talk and many more. To make the life going on for this device, micromax A111 is equipped with 2100 mAh of standard Li-ion battery which the company claims to deliver 6 hours of talktime.

Quick View of Micromax A111 specifications: