Counted amongst the leading telecom service provider in India, “Idea Cellular” has launched a new entrant to upgrade it’s portfolio in the Smartphone arena named, ” Idea Aurus II” in the Indian market. Idea Aurus II is a new version of company’s previously launched Smartphone, “Idea Aurus” with some added features and specifications. 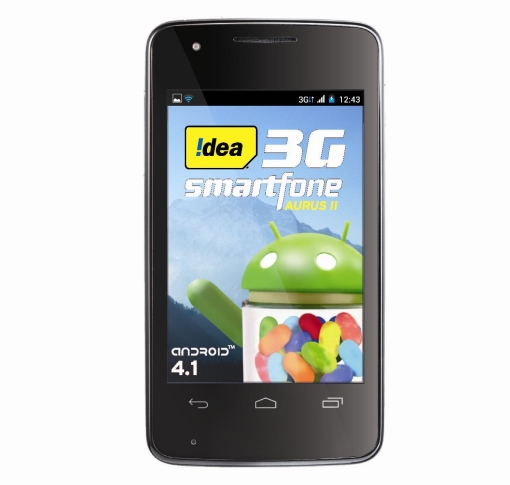 Though company’s previous launches like Idea Ivory and Idea Zeal are available under budgeted segment but with Idea Aurus II company is strongly aiming to mark it’s virtue as a preferred choice in the low cost Android powered handsets and to make the launch more meliorate company has marked it’s price as cheaper as Rs 6,490. Despite it’s low cost let’s eye on to it’s Specifications, Idea Aurus II flaunts 3.5-inch TFT LCD Capacitive touchscreen display with 320×480 pixels resolutions. Dealing with it’s Software Specifications, this device runs on Android 4.1.2 Jelly Bean operating system powered with a Single Core processor clocked at 1 GHz. With such high software specifications, it will be one of the first device across the industry offered at such a price range. In terms of Storage Specifications, Idea Aurus II equipped with 512 MB of RAM, 4GB of Internal memory which can be expandable via micro SD card slot.

To add more sparks in it’s features, Idea Cellular Aurus II support Dual Sim with Dual Standby Connectivity which can be easily seen in most of the Smartphones launched recently. Shifting the shaft towards it’s Photography Specifications, at the back it comes with a primary camera rated at 3.2 MEGAPIXEL and a secondary camera rated at VGA.

Chief Marketing Officer, Idea Cellular, Sashi Shankar claims Idea have sold more than 3,00,000 devices since last year. Stats sound quite impressive. Hopefully, it will get even better with the launch of new devices in couple of months of interval.

Briefing it’s Connectivity features, it support 3G, 2G, WiFi 802.11 b/g/n, 3.5 mm Audio Jack. Enumerating the specifications in terms of data and other benefits, Idea users will get 1.6 GB of 3G data and Idea TV subscription free for the first 3 months with a pack of Rs 261.

With such a price tag it will be definitely compete strongly against a lot of other handsets available in the same segment.