One of the leading telecom operator in India, “Idea Cellular” is all set to upgrade it’s portfolio in the Indian market as the company has officially announced a new element it it’s prodigious range of Smartphones, “Idea Whiz”. The Idea has listed this handset on their website at an affordable price tag, which is INR 7,850. 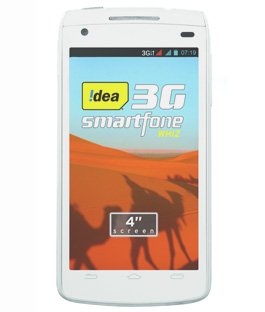 Recently we saw launch  Aurus 2 by idea which is a decent smartphone, now in total, company is currently selling five devices and they officially announced it’s sixth one in the same batch. Shifting the shaft towards it’s technical specifications, it will sports a descent 4inch WVGA capacitive touchscreen display that supports 480 x 800 pixels resolution. Dealing with it’s Platform dependency, this device will sails on Android 4.0 Ice Cream Sandwich operating System and powered up with a Dual Core processor probably MediaTech clocked at 1 GHz. In terms of Storage specifications, it will be equipped with 512 MB RAM, 4GB of internal memory which can be easily expandable up to 32 GB via micro SD card slot.

As far it’s Photography specifications are concerned, Idea Whiz will be equipped with a primary camera rated at 5 MEGAPIXEL with autofocus and LED flash technology which will help the user to click images and record video in low light condition. Briefing it’s connectivity support, it will be equipped with 3G (7.2Mbps), 2G (class 12 GPRS), Bluetooth 4.0, micro USB, Wi-Fi, G-Sensor, light, proximity sensor and a 3.5mm Audio Jack for universal music connectivity.

As it is a mid segment phone, it will get powered with 1500mAh of battery which the company claims to deliver 12.5 hours of talktime on 2G and 8.5 hours on 3G. This Device also supports Dual Sim with Dual Standby technology.

Apart from the above specifications, to please more buyers and attract towards Idea Cellular network, company is offering this device with a special package on Internet surfing, Idea is giving 1.6 GB per month for 3 months on 3G/Unlimited data on 2G for first 3 months and Idea TV Rs. 150 pack p.m. free of charge for 3 months.

The Price of Idea Whiz is Rs 7850 and it will be soon available for sale on all the online retailers across the nation.