Mitashi, domestic manufacturer who is a well known player for it’s wide range of consumer electronics goods across the nation has launched a new element to upgrade it’s line up of portable gaming console in the Indian market. The name of this new gaming console is dubbed as Mitashi Gamein Thunder Bolt and is launched at a an affordable price of Rs 6,799. In the era where smartphone and tablet industry are on their peaks of evolution, this segment has somehow remains under shades. 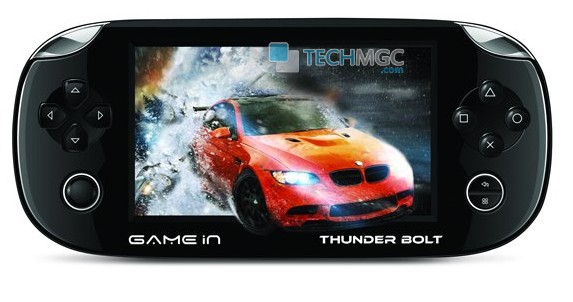 Coming back towards the launch of the day, this entrant will be the second Android powered gaming console launched by the company and it will join as a successor for the company’s already available Gamein Thunder in the gadget segment. Shifting the shaft towards it’s specifications and features, on the front this device sports a decent 4.3 inch of touch screen display, with stylish and candy game controls giving it an overall nice look. As we mentioned above that it is an Android gaming console , so this device runs of Android 4.0 ice cream sandwich operating system and in terms of power, it is equipped single core processor at a clocked at speed of 1GHz.

In terms of storage, it comes with 4GB of internal memory which is decent enough. In addition to it, the console comes with microSD card slot through which memory can be expanded easily upto 32 GB (though it is not confirmed). No details were made available by the company regarding it’s RAM but we can assumed it to come in two standard options which includes 256MB or 512MB looking from the price point. Though if it comes with only 256MB RAM then by no means it can be considered an Android gaming device, so chances are strong that it will be atleast 512MB or more in terms of RAM capacity. This device also supports both the primary and secondary camera options which allows the user to click nice snapshots while playing. On the back side, the primary camera is rated at 2MEGAPIXEL while on the front it comes with 0.3 MEGAPIXEL of secondary camera. It also supports Google Play store and to download all the latest games on this device it is offered with WiFi connectivity.

There is also no word on the compatibility of the controls on GameIn Thunder Bolt and whether they work with every game title available in Google play or only a select few. Company is planning to target kids with this device. Though they are calling it a gaming device but from specifications it just looks like another entry level android device.