Samsung, one of the biggest giant in electronics and telecommunications industry across the globe has launched a new successor in Galaxy series as,”Samsung Galaxy Grand” phablet in the Indian market. Samsung Galaxy Grand packed with some astonishing features and specifications to deliver. 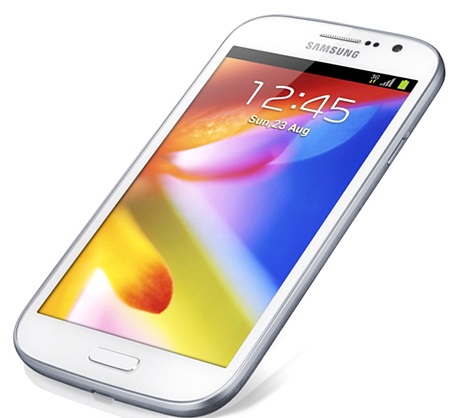 Flourishing the Display, Samsung Galaxy Grand featured with 5 inch WVGA TFT LCD Touch Screen display. This Device support Dual Sim Technology. Samsung mobiles are amongst the top performing Dual Sim Smartphone’s with total communication docility that allows users to command two phone numbers form a single handset. Under the hood, Samsung Galaxy Grand runs on Android 4.1.2 Jelly Bean Operating system powered with a Dual Core processor clocked at 1.2 GHz. Apart from Dual Sim technology, the most starring feature of this device is- it enable the users to make a direct call just by raising up your handset to the ear whereas Smart Alert which shows the missed events display that includes missed calls, new messages just by picking up the phone. Dealing with the Photography, Samsung Galaxy Grand equipped with 8 MEGAPIXEL of primary camera with Zero Shutter Lag and Flash, and a 2 MEGAPIXEL of front camera apart from this it also support a Smart Stay features which uses the front camera and prevent it from going into standby mode by detecting a user in front of the device.

“Continuing with our legacy of launching innovative devices that redefine consumer experiences, I take great pride in announcing the launch of the Galaxy Grand in the Indian market .The Galaxy Grand is revolutionary not only in terms of the great Smartphone experience that it provides but also in terms of its value proposition,” Asim Warsi, Vice President, Samsung Mobile said.

Quick- Quick-Eye of Specifications listed below:

The Price of Samsung Galaxy Grand is Rs 21,500 and it is available with an introductory offer, a Flip Cover in its box, and users can avail INR 8000/- worth music and movies for free through ‘My Services’ along with a free 50GB Dropbox space. Vodafone users get additional benefits of 2GB free data download for two months.