Xolo Mobiles, one of the leading International brand is in the news once again. Leaked pictures and some of the specifications of it’s new entrant ( which can be a rumor) has been surfaced on internet. From the Sources, we came to know that company will soon launch it’s new player named as, “Xolo Play T1000 Nvidia Tegra3” which will be a Quad core powered phone in the high price segment. Xolo always endeavors to provide an unbelievably fast smartphone experience to the premium smartphone consumers of today. 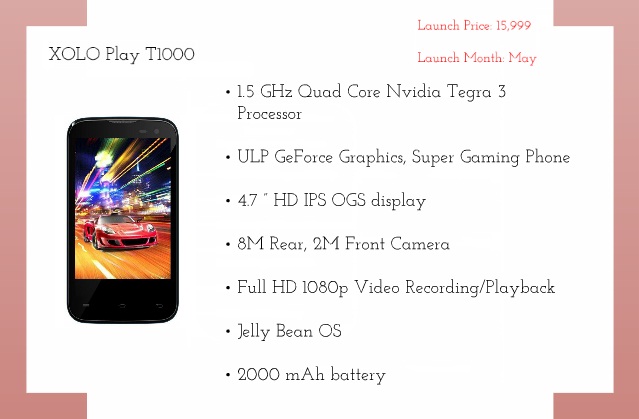 However, as per it’s leaked specifications and details all over the net, it looks nice competitor against the already available quad core mobile phones in the Smartphones arena. Xolo has not made any official announcement about this Smartphone yet so we can expect it as a rumour though as per it’s image leaked it can be speculated a smell of something fishy burning all around. Rotating the compass needle and stretching a line towards it’s specifications, in terms of frame up Xolo Play T1000 is expected with 4.7 inches of OGS IPS Touch Screen display with 1280×720 pixels resolution. Speculating it’s Platform dependency, this device will run on Android 4.1 Jelly Bean Operating System powered with a Quad Core Nvidia Tegra 3 processor at a clock speed of 1.7 GHz. Briefing it’s Storage Specifications, this device is expected to be equipped with 1GB of RAM, 8 GB of Internal memory though it will be available with a micro SD card slot to expand the memory size but as per it’s leaked image there is no such information available till date.

This device will come with a Single Sim slot connectivity. Enumerating it’s Photography specifications, Xolo Play T1000 will be equipped with both the primary and secondary camera. The primary camera will be rated at 8MEGAPIXEL with autofocus and LED flash technology ensuring the user need of clicking nice images even at low vision, on it’s front it is equipped with a secondary camera rated at 2MEGAPIXEL for video chatting. This handset will be provided with a ULP GeForce Graphics card which will deliver superb gaming experience.

To make the life going on for this handset it can be expected with 2000 mAh of battery. From the features it looks like XOLO Play T1000 is targeted to provide amazing gaming experience. But, it looks like XOLO didn’t think much about the battery life and there is only 2000mAh battery in the phone. Gaming on smart phone requires a lot of battery life.

However, all these details are tentative and they may change. So, as soon as company will make the official announcement of this device we will update it’s details.