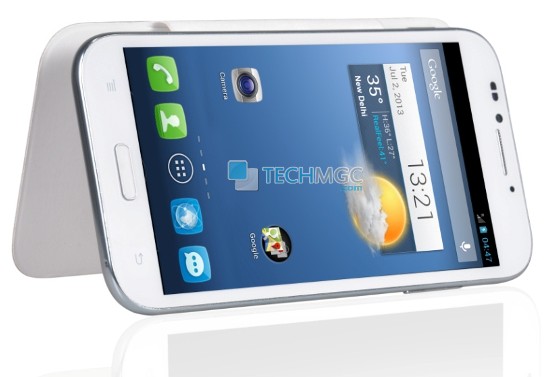 Some of the devices like Karbonn Titanium S2 and Karbonn Titanium S5 had given nice sales figures to company and now to keep the momentum on rolling, company has announced to come with more powerful devices under the same roof in the future. Shifting the shaft towards the launch of the day and giving a glance towards it’s specifications and technical details, in terms of frame up this device incorporates a brilliant 5.5 inch(13.9 cm) HD IPS Capacitive touch screen display which is engineered for an ultimate big screen pleasure. The screen of Karbonn Titanium S9 boasts up with 1280 x 720 of pixels display which enables you to experience the excellence of life in 16 million color output. With such a huge screen and high pixel density will make watching movies & videos, surfing net, reading E-books and playing HD games an absolute pleasure.

On the software front, this device sails on Google’s latest version of Android operating system i,e Android 4.2 Jelly Bean operating system . Large HD screen with IPS display coupled with Android 4.2 has been designed to bring the best of the Android eco-system onto your fingertips which makes the overall experience more joyful. To supply the power-intensive needs of your smartphone for everyday lives, this flagship device is powered by a Mediatek chipset enabled quad core processor at a clock speed of 1.2 GHz. To fascinate the user to remain active on multiple sim at a same time, this device is offered with dual sim (GSM+GSM) with dual standby technology.

Commenting on the launch, Shashin Devsare, Executive Director, Karbonn, said, “The Karbonn Titanium S9 is the most exciting revolution to have come from Karbonn till date. The launch of the device initiates our foray into the HD IPS smartphone category wherein we seek to satiate the consumer needs with the best-in-class technological innovations. We understand the emergent needs of consumers of smartphone devices which look brilliant and work effortlessly. Thus in this regard, our product innovation is geared towards creating an eco-system of mobile devices, which bring the best of smartphone experience to them.”

Enumerating it’s storage specifications, this device is equipped with 1GB of RAM which makes the overall performance smoother and navigates between multi-tasking at a blink of an eye. It comes with 16GB of internal memory which can store lots of applications and if the user still wishes for more space, company has manufactured this device with a micro SD card slot through which memory can be expanded up to 32GB. In terms of photography specifications, this device is equipped with both the primary and secondary snapper options. On the back panel, it boasts a primary camera rated at 13 MEGAPIXEL and on the front panel it supports 5 MEGAPIXEL of front facing camera for video chatting. Some of the other features of the camera includes autofocus, LED flash. The ‘Smart’ camera also enables you to click radiant pictures on its smart camera application.

Connectivity wise, it supports 3G which makes the overall net surfing, downloading more joyful on this large screen phablet. Other features include 2G, WiFi 802.11 b/g/n, Bluetooth 4.0, GPS, G-Sensor, Proximity, Ambient Light Sensor and a 3.5 mm audio jack. This device will fulfill all your needs to get connected with social world throughout the whole day by supplementing a huge 2600 mAh enabled battery, boosted with power-saver features which improving standby time drastically erases constant charging woes from your ‘Smart’ life. Now you can chat, call, text, surf and play games, without worrying about battery issues.

The price of this device is Rs 19,990 and it will be available for sale on all the online retailers across the nation.

Though, it is an full HD device with nice features and specifications but will it be comparable enough against the other device of HD club in the market. What you all guys think? Share your view with us.

. Large HD screen with IPS display coupled with Android 4.2 has been designed to bring the best of the li