Google, one of the world’s leading corporation serving in internet related services and products worldwide has announced a new version of Google Nexus 7 at an event held in San Fransisco. At this event company revealed details for the new Nexus 7 in terms of its technical details as well as cosmetic changes. 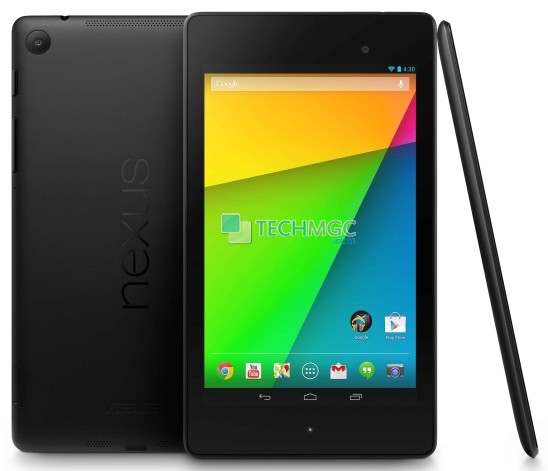 The reason behind the launch of this new version of Google Nexus 7 is the recorded success and popularity which the company has gained from the older version. This new device has been named as New Google Nexus 7 and is packed with some latest specifications and features which will be introduced in the gadget industry worldwide for the first time. Opening the suspense and giving you a glance towards its features and specifications, in terms of frame up this device will flaunt 7 inches of HD IPS touch screen display with 1920×1200 of pixel resolution. Such a high resolution is enough to make the display more sharper and crispier by delivering ~323ppi of pixel density. This is the biggest difference which can be recorded in terms of features update. However, now this tablet will also joins the elite club of HD tablet available in the gadget industry worldwide. To protect the screen from scratches and irrelevant marks this device comes with corning gorilla glass protection.

Dealing with its platform dependency, Google has introduced this device with the updated version of jelly bean which makes it the first tablet to run on Android 4.3 jelly bean operating system. The new version of Android is also available for Nexus 4, old Nexus 7, Nexus 10 and Galaxy Nexus. Some of the new user-facing features which supports a new set of multi-user settings which includes restricted profiles for kids, which means you can restrict app content at a user level. It’s joined by OpenGL ES 3.0 support which is aimed to attract a majority of heavy gamers onto this tablet. This device is powered by a Qualcomm Snapdragon S4 Pro quad core processor running at a clock speed of 1.5 Ghz which makes the switching and surfing between downloading applications onto this device much quicker and faster. To make the graphics look more better as compare to the older version of Nexus 7, this device comes with Adreno 320 GPU card support.

Enumerating its storage specifications, the RAM has been upped to 2GB from 1GB which company had introduced in the older version. Internal memory for this device has been categorized in two memory capacities i,e 16GB and 32GB respectively with no micro SD card support. Briefing its connectivity specifications, it support 4G LTE especially for 32GB version while the other 3G, WiFi, Bluetooth, GPS, aGPS and a 3.5 mm audio jack are common for both the version. Coming towards its photography specifications, this device comes with both the primary and secondary snapper options. The primary camera is updated and now it is rated at 5 MEGAPIXEL which is good enough to capture best moments of your life with nice quality. Secondary camera is rated at 1.2 MEGAPIXEL which will enhance the quality of video calling/chatting.

The battery is a sealed 3950 mAh unit which promises about 9-10 hours of usage. It supports wireless charging which has been added for this version especially and this might be one of the first tablets to support it. The basic model of the tablet will cost $ 229 in the US. So far, there is no word on the availability of the tablet in India. Though there are rough chances for this tablet to to India any soon.

This tablet is equipped with nice and amazing features and if it comes in India with the same price we think it will create a storm in the tablet segment of India. What your view on this tablet, share with us.