Another device just dropped in the arena of Smartphones by one of the leading domestic manufacturer in the country known as “Byond” has launched a new successor under it’s prodigious series of smartphone labelled as, “Byond B65” in the Indian market. 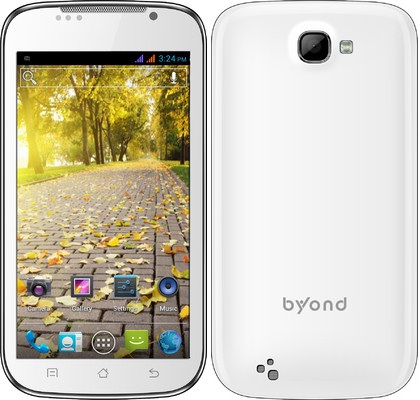 Byond B65 somehow hold the same specifications as Byond B65, however there will be a little advancement in certain features as the company claims that it will be compete against Micromax Canvas 2 under the same price tag approximately. Looking towards it’s Specifications, in terms of frame up the device sports a huge 5 inch TFT LCD screen display with 800×480 pixels resolution. It also supports multi-touch display up to 5 point. Dealing with it’s dimensions, Byond B65 weighs nearly 190 gms and 73.85x143x11 mm in overall measurements. Incorporating a most common feature in most of the Smartphones now-a-days is the Dual Sim ( GSM + GSM ) with Dual Standby support. Briefing it’s Platform Dependency, Byond B65 runs on Android 4.0 Ice Cream Sandwich Operating System powered with a Dual Core processor clocked at 1.2 GHz. Opening the Storage Unit, this device comes with 512 MB RAM, 4 GB of Internal memory which can be easily expandable up to 32 GB via micro SD card slot.

Eying on towards the Photography, this device support primary camera rated at 8 MEGAPIXEL and a secondary camera rated at 1.3 MEGAPIXEL for video calling. However, most of the handset as per my knowledge launched by the domestic firms claimed such a high resolution camera in their device which actually doesn’t hold it’s virtue up to it’s standards, hopefully this device stands firm with their quality of camera. Shifting the compass and pointing towards it’s Connectivity, Byond B65 support 3G, 2G, Wi-Fi, micro USB, Bluetooth, 3.5mm Audio Jack, G-Sensor.

Quick View of Byond B65 Specifications:

To make the life on of this device, company has dubbed it with 2400 mAh of battery with nearly 160-180 hours of standby time. The price of Byond B65 is Rs 9490 and is available for sale on flipkart. However, it will be interesting to see how market will responds towards Byond B65 as if the same hardware specifications are available in already reputed launched handset Micromax A110 and Lava Iris 501 in the market.