It’s looks like Karbonn Mobiles is aiming to marks it’s virtue as a strong competitor against the other leading mobile phone maker company’s in the Smartphone arena of India, as the company has launched another new Smartphone, “Karbonn Smart A12” in the indian market. Few days back, they came up with two new products in the tablet segment . 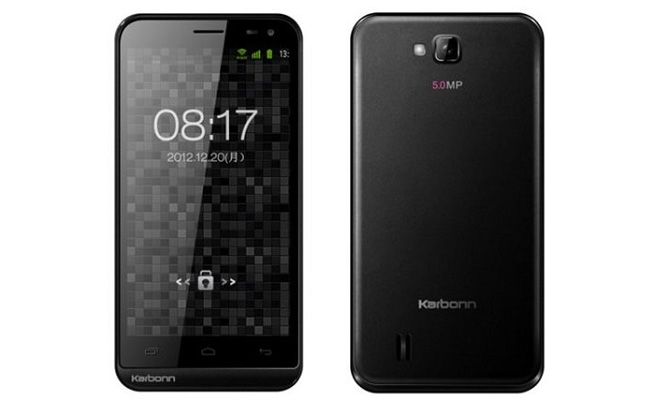 Karbonn Smart A12 is a new Smartphone in the entry level segment dubbed with high end specifications providing you right value for your money. Viewing it’s appearance, Karbonn Smart A12 sports with 4.5-inch Capacitive Touch Screen qHD display with 854×480 of pixels resolution. This device also supports Dual Sim with Dual Standby technology. Dealing with it’s Platform dependency, Karbonn Smart A12 sails on Android 4.0 Ice Cream Sandwich Operating System powered with a Single Core Cortex A9 Broadcom’s processor clocked at 1 GHz. In terms of Storage specifications, this device supports 512 MB of RAM which is enough for the user to upgrade it’s Android Ice Cream Sandwich operating system to Jelly Bean, it also supports 4 GB of internal memory which is expandable up to 32 GB via micro SD card slot. Briefing it’s Image Optics, the device offered with a primary camera rated at 5 MEGAPIXEL with LED flash enabling the user to capture images even at the dark vision and a secondary camera rated at VGA for video calling.

Specifying it’s dimensions, the device weighs nearly 164 gms and measures 135 x 66 x 11 mm in overall dimensions. Enumerating it’s Connectivity support, Karbonn Smart A12 support 2G, 3G, Wi-Fi, Bluetooth, GPS. To make the life going for this mobile handset, this device is equipped with 1800 mAh of battery which claims to deliver 4 hours of talktime. Some of the pre-loaded applications include Whats App, Skype, Kingsoft Office, Facebook and many more.

The Price of Karbonn Smart A12 is Rs 7,990 and is available for sale on all the leading online retailers across the country. With such a price tag it will definitely compete with other devices available at the same price tag.